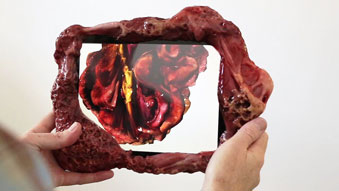 Social Capital and the “Commons”, Scott Townsend
This project is based on connecting abstract issues of globalization (immigration and travel, wealth, communication, borders, language etc.) and its effect on the experiences of local communities through their own specific issues. The exhibition begins with projected animations that visualize the themes in the topic.The exhibition space is turned into a community space where groups and individuals can add their own stories and locations in a digital map projected in the space. Individual and collective maps can be shown together and contrasted and compared.

Making the Impossible Real: Poems on the Aesthetics and Linguistics of Assisted Reproductive Technology (ART), Irini (Irene) Athanassakis
Having children used to be (considered as) the most natural thing in the world, but it stopped being so. Not only because of the increasing number of infertile women and man (maybe due to environmental and life style issues), not only because of the increasing age of procreation in so called developed countries (for reasons of education, employment, mating habits etc.). Since the nineties, Assisted Reproductive Technology (ART) has been revolutionized and techniques, medication and research are still one of the most innovative of our times, despite the still explosive demography situation and the vanishing resources on the planet. Biopolitics, Bioethics and BioArtists have found another exciting topic.

/images/exhibition-haig.jpg" />
The work ‘Fleshify the World’ extends the idea of how the media sphere is increasingly thought of as part of our of bodies; mobile phones, the internet and social media as new outgrowths of our biology. ‘Fleshify the World’ takes this to an extreme end: an iPad fused with human flesh. ‘With this in mind, if our technologies are bodily extensions, then those same technologies could share diseases of the human body. ‘Fleshify the World’ make such an idea literal in presenting an iPad that has developed an aggressive form of cancer or a degenerative human disease.

LA BAÑERA / THE BATHTUB, Laura Corcuera
THE BATHTUB is a score of movements and images in which I explore, drawing on corporeal emotions, questions regarding hidden pains, suffering and precarious life. A physical activity in which object and subject acquire new meanings. This performance speaks about the absurd and the deep, about the shapes of precarious identities, about vulnerability, about the significations of the experience of life (with all this tabus, limits, and buildings and loves as well). A visual action of emotions shared with an audience participating. This action is the combination of a human body with a common object of self-care delocalized from the private space (bathroom) to the public space (a land, a sea, a mountain, a square, a street...).

Fungi decay as an art form, Patrícia Noronha
Fungi degradation of human goods is commonly associated with destruction processes in which quality and beauty is lost. In this sequence of works filamentous fungi growth is manipulated in laboratorial environment to intentionally promote the decay of easily recognizable symbols of human civilization/culture, transformation that results in a new art form. The intention is to reflect about the use of biological processes in contemporary art creation, namely in bio art. While our previous bio art constructs explored microorganisms as an art instrument [1] producing new patterns/colors induced by the artist but in its final form determined by nature, here similar methods are used in the destruction of man-made artifacts.

Inside out Bodies: Various Video Artworks: Ian Haig
Hal Foster spoke of the return of the real the 1990s and a focus on materiality and the body. It is my position that twenty years later in 2016 we see the return to the body, but unlike the 1990s’ abject art’ the contemporary media environment has amplified an awareness of our own bodily abjection. The explosion of the current contemporary media sphere and our relationship to technology puts the corporeal body back onto the cultural radar where we are often confronted with the aesthetic opposite of our digital, mediated reality and forced to re- familarise ourselves with our own biological corporeality. In direct contrast to the digital screen and technology’s perfection, speed, resolution, rationality, we reminded our bodies remain primitive, irrational, messy and abject.