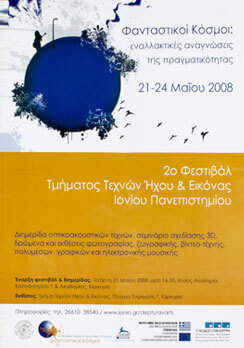 The aim of this symposium, in which acclaimed scientists and artists participate, is to designate the presence of the Department. A special emphasis will be given to the presentations of new technologies in relation to the modern educational need in the sector of audiovisual media, as well as their application possibility in the production of interpretation models and reconstruction of reality.

The main thematic drive of the festival is the “Imaginary Worlds” as a model of gnoseological, aesthetic and metaphysical approach, like those formed through the new systems of record and revisulisation of the apprehensable world.

Within the framework of the festival exhibitions will be organised featuring the works of students from the department (photography, drawing, video art, installations, comics and experimental multimedia).

The exhibition will be featured for Wednesday the 21st and Thursday the 22nd of May 2008 in the building of the Old Psychiatry of Corfu, which also accomodates the Department (Kapodistriou and Akadimias Str. Corfu).