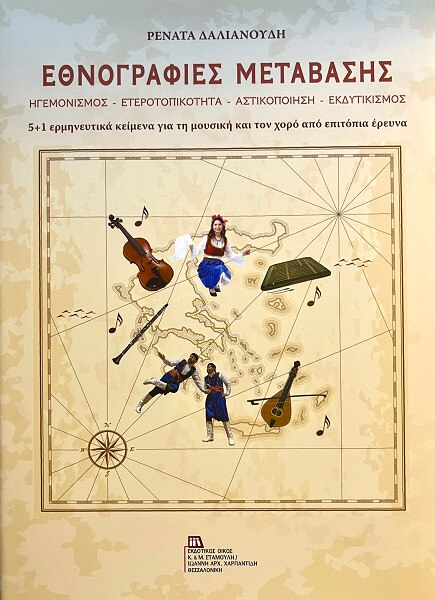 This monograph, fruit of twenty years of fieldwork, aims to enhance, through a cultural mapping of regions of Greece, aspects and representations of its folk culture, in particular music and dance as processes leading to cultural transitions and metaidentities, in the recent past and the present. Its basic theoretical and interpretive axes are: Westernization / Europeanization, urbanization, cultural and linguistic hegemony, (national) cultural management, multi-insularity, localism, hetero-topicism and transitivity (the last two terms, together with cultural transitions and meta-identities, coined by the author, are neologisms in the disciplines of Anthropology, Folklore Studies and Sociology of Music).

The geo-cultural regions (case studies: Ionian Islands, North Aegean Islands, Epirus, Corinthia) are representative of the dualistic geographical identity of the country (island and mainland Greece), the human-geography (ethno-local, ethno-cultural and ethnic groups, such as Peloponnesian Arvanites, Sarakatsans, Albanian-speakers of Epirus), as well as of the diversity of music and dance, thus offering an intra-borders crosscultural approach to the musical culture of Greece. Occasioned by and further to references to characteristics such as rhythms, scales, modality, instruments, tunings, techniques, repertoire, and so on, this theoretical study sheds light on the role of music (mainly) and dance (consequently) as cultural goods in each geo-cultural region, and enhances the social, ideological and political (in the widest sense) conditions/ causes of their creation, as well as of their cultural transition: from the folk of the rural environment to the popular of the city, from the eastern to the western(-style), from the ecclesiastical to the secular element, from the traditional style to the modern, from the traditional performance to the adaptation, from local to glocal, from particular to ethnic and world. So, from the Asia Minor karsilamades and manedes of the religious feasts (panegyria) we pass to waltz, tangos and polkas by the diseuses at the popular entertainment venues. From the kariotikos dance of Ikaria we pass to the deterritorialized ‘nisiotikos’ (generic ‘island dance’) in the nightspots of Athens. From the Italian-rooted Ionian kantada and the brass bands we pass to the harmonized ecclesiastical idiom of the Ionian Islands. From the traditional feast with bagpipe (tsambouna) and toumbi (drum) we pass to the modern festival with pop - folk band with keyboards and bouzouki in the North Aegean islands. From the folk songs we pass to the post-folk arrangements of folk songs (e.g. Klezmer Yunan, V.I.C., Μοde Plagal, etc.). Μeta-identities which reflect the transitivity, the de-territorialization, the heterotopicism, the de-framing, the new signification of tradition, folklore and, in the end, music itself and dance.

Examined too are the cultural contextualization of music and dance, as well as the practices of each local folk tradition and culture in the framework of the revival of customs and rituals (e.g. ‘Yem’ at Sophiko in Corinthia, ‘Yarentis’ and ‘Trata dance’ at Perachora in Corinthia, ‘dance with the tencere [casserole]’ at Karya on Lefkada island), through the intermediation of cultural associations of national and local ambit. (Another original contribution of the monograph is the classification of cultural associations on the basis of their ideological and geographical scope.) All this ethnographic material and experience ‘in situ’ led to a guide of standards for ethnographic research as well as to a body of suggestions for cultural management, also included in this study.

Common trait of the texts is that Ethnography and Ethnomusicology converse with (cultural) History, Folklore Studies, Sociology and Anthropology, through narratives which, despite the self-ethnographic substrate, are interpretive and critical in character rather than notes from the ‘daybook’ (as is often the case in ethnographic texts), but without this precluding reflection, self-referentiality and self-criticism.

FROM THE PREFACE BY Dr ELEFTHERIOS ALEXAKIS
‘Renata Dalianoudi’s work is at once a model and an original study, which draws on a very rich Greek and international bibliography in the disciplines of Folklore Studies, Ethnology, Anthropology and Ethnomusicology. The in-depth approach, following Geertz’s method of ‘thick description’ and Herzfeld’s theory of ‘anthropology of anthropologist’, makes her text understandable to non-specialistsin (Ethno)Musicology or Choreology, without this meaning that it is popularized. Her monograph is simultaneously an Ethnography and a theoretical study of music and dance in Greece, an Ethnomusicology, an Ethnochoreology, an Anthropology of Dance, a Sociology of Music. It is a very important study, an excellent contribution!’.