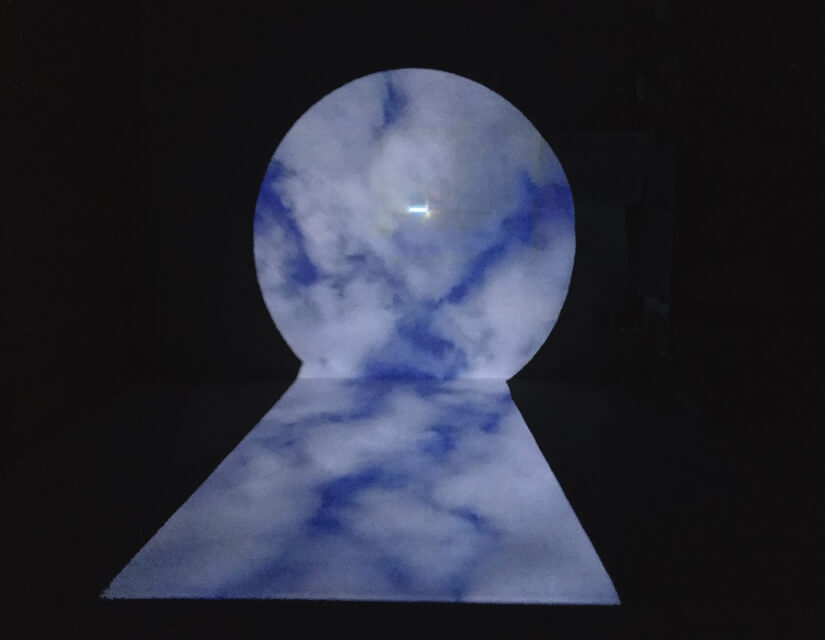 In a dark environment, a piece of blue sky with white clouds is projected through an oversized keyhole. The circular part is projected on the surface of the wall and the rest of it on the floor, which is transformed in a road on which the viewer walks. As the viewer walks on the road that is structured by a part of sky, he heads to the point where he is suggested to dream, since the word Dream is projected on a screen that is placed at the height of the eye. The project deals with the embodyment of the natural presence of the human in the illusion of an imaginary environment that leads him to the "dream" walking through an experienced road. The viewer is called to penetrate his unconscious, walking between the boundaries created by the shape of the keyhole. The projection of all the elements in an undivided shape and space, results in the absolute connection of the dream with the reality in an aerial and simultaneously grounded route.

Yanna Kali
Yanna Kali was born in Athens in 1981 and graduated from the School of Fine Arts of AUTH with excellent grades in 2007. In 2017 she started postgraduate studies at the Ionian University in the field of Audiovisual Arts in the Digital Era. She was recently selected with nine other artists from around the world to participate in a residency program at the Mark Rothko Center for Contemporary Art in Latvia. Her work has been included in the main program of the Biennale of Young European and Mediterranean Artists entitled Symviosis ?. She has taken part in group exhibitions in Greece, Cyprus, England, Italy, Latvia and has held a solo exhibition at Zina Athanasiadou Gallery.
BACK
2022