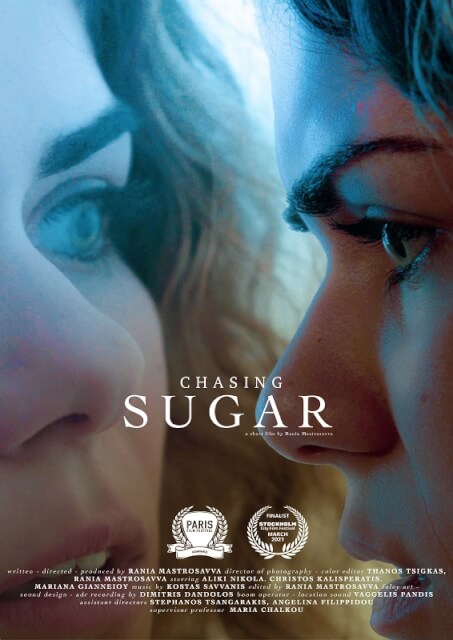 Zoe is a 25 year-old student, living in Corfu island, Greece with her only friend and roommate Anne. Waking up late an afternoon Zoe realises that her friend is missing and she goes out at night alone in search of her. The strangely empty and quiet town, a series of bizzare events and the sense that she's been followed gives her the realization that something strange is going on and her eager to find her friend grows stronger.
At that time she comes across a dark human figure that wants to capture her. Trying to escape, Zoe ends up in a white room with nothing but a mirror inside.
As she walks closer to the mirror she sees that someone is trapped inside a room. Thinking that it's her friend Anne she reaches and goes through the mirror into that other room.
As she sits down next to the other person, thinking that she is Anne, she realizes it's her own self. In a desperate and decisive moment she tries to save her double, only to realize that her double can not cross to the other side of the mirror. Realizing that there's no way out the double lets go of Zoes hand.
Zoe wakes up in her room in the morning, gets dressed and goes for a walk by the sea in the now fully alive and noisy town. As she stands and stares at the waves she meets a girl named Anne sitting nearby. After the two girls meet they sit by the sea talking.

Rania Mastrosavva is a graduand at the Audiovisual Arts department at Ionian University. Her interest in arts began from a young age. She started taking piano lessons at the age of nine and later, she started experimenting with photography, graphic deisgn and video editing. As an undergraduate at the Audiovisual Arts department she took interest in film directing and as her thesis project, she wrote produced and directed her first short film "Chasing Sugar" (2021).