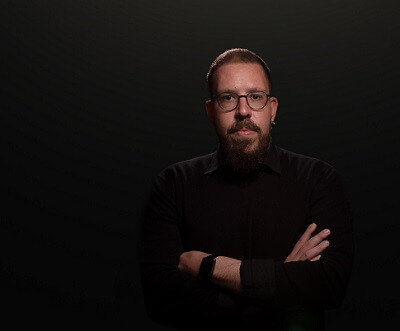 His major project so far, Flickering Souls Set Alight (2019), is the cinematographic depiction of his research on ALS (Amyotrophic Lateral Sclerosis). His latest short film Allimonò (2020), was produced by Apulia Film Commission, under CIAK memory call Interreg Greece Italy and at the moment is under festival submission.

Iakovos’s first degree in Audio Visual Arts at the Ionian University, was followed by an M.A. in Cinematography at Bournemouth University. At 2019 he completed his Ph.D. on the work of Theo Angelopoulos at the University of Central Lancashire. The title of his thesis is: “Reshaping Contemporary Greek Cinema Through a Re-evaluation of the Historical and Political Perspective of Theo Angelopoulos's Work”.

He is an active researcher, counting numerous international publications. He is an official researcher in StoryLab (Skills Training for Democratised Film Industries) and scientific collaborator in InArts (Interactive Arts Lab) of Ionian University. He is also a member of the Scriptwriters Guild of Grecce and the Directors Guild of Greece.

At the moment Iakovos is teaching as an academic scholar in Audio Visual Arts department of Ionian University. He also in the process of completing his post-doctoral research in Panteion University of Social and Political Science with Prof. Seferiadis. The title of his research is: “Suspended spaces of memory: Heterotopic historical narratives and contentious politics in contemporary cinematic practice”.