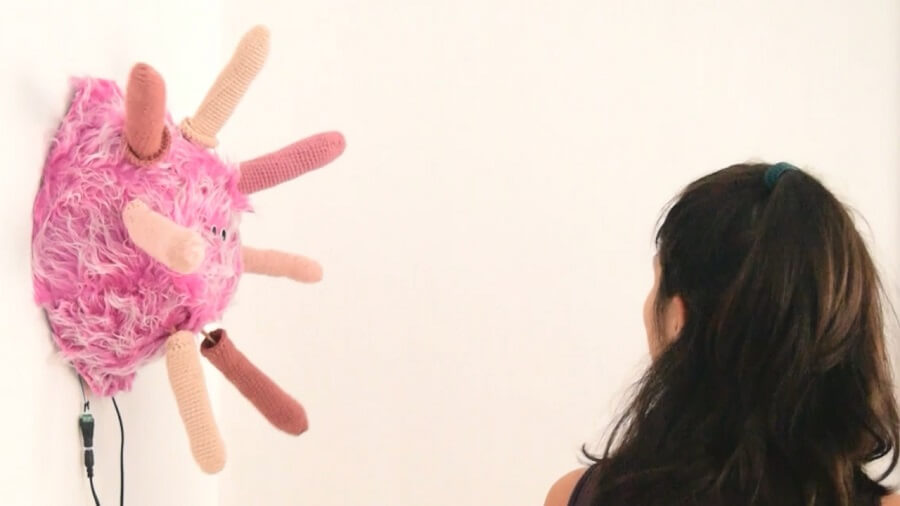 “Medusa” is a humorous comment on a situation, which women confront multiple times in the public space, the “catcalling”. Regardless of guise, age or any other characteristic, and merely due to the fact that for some men women represent just another flesh in their field of view, lots of men will react with a peculiar sound or “movement” of their genitals. Medusa “moves” in the same way by imitating this behavior. Whoever approaches it, Medusa arises by moving its knitted phalluses towards the viewer. The title refers to the famous Medusa, who according to the myth was stalked and raped by Poseidon, then blamed for it and cursed by Athena by turning her to the mythical monster.

Afroditi Anastopoulou
Afroditi Anastopoulou was born in Athens, in 1994. She studied visual arts at the Fine Art school of the Aristotle University (2017) and holds a master in costume design from the Royal Academy of Fine Arts in Antwerp from where she graduated with distinction (2019). She has attended courses of physical theatre with Giorgis Sfiris and Roza Prodromou and a series of seminars regarding performance and scenography. She has worked as a costume designer and a costume assistant in Greece (Stathmos Theatre, Sychrono Theatro) and in Belgium. In September 2019 she was the scenography curator of the “All-night Tribute to Chrissa Spilioti” organized by Analogio Festival. In November 2020 she was selected to participate in the fashion workshop “MORPHES” directed by Ioanna Kourbela, organized by “Open Plan” of Athens and Epidaurus Festival. As a visual artist she has participated in multiple team exhibitions and projects in Greece and Belgium like BillBoard Project Antwerp (2020), Looming Together (Victoria Square Project, 2020), Love and Disaster in Athens (Fokianou ArtSpace 2020), Thank you come again: Selected Master of the Royal Academy (2019), Athens Dance Video Project (2018), Thessaloniki Queer Art Festival (2018) etc.
BACK
2023