The dictionary of violence 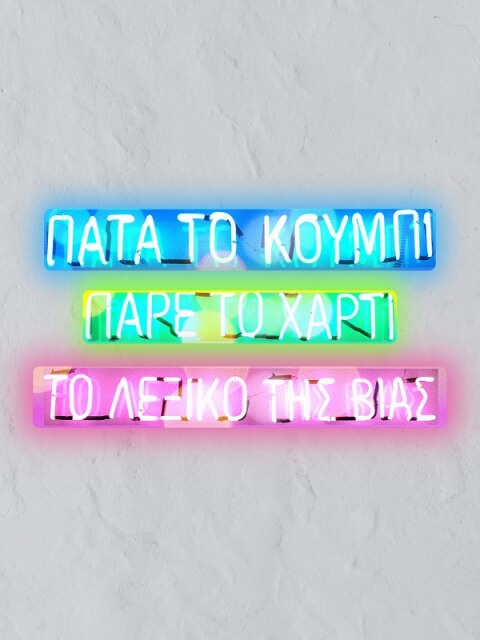 Verbal abuse (also known as verbal bullying) is described as a negative statement directed at the victim or relevant to the victim. Anyone can accept verbal abuse. Typically verbal abuse increases in intensity and frequency over time. A targeted person can develop any disease related to stress over time. Verbal abuse causes the victim emotional pain and mental distress. Although it is the most common form of abuse, verbal abuse is generally not perceived with the same seriousness as other forms of abuse, because there is no visible evidence that it has happened and the perpetrator may have impeccable behaviour in dealing with the surrounding. The interactive installation The dictionary of violence deals with words embedded in our everyday vocabulary, which have been and are "tools" for verbal abuse for various social groups such as women, LGBTQI+ people, etc.

Ermina Apostolaki
Ermina Apostolaki is a spatial designer. She has studied Stage and Costume Design in Vakalo Art and Design College and Business Administration at the University of Piraeus (BA). She holds two Master’s degrees, from the Technical University of Berlin, Institute of Architecture (MA), and the National Technical University of Athens, School of Architecture (MRes). Her first solo performance Personal Jesus was presented in 2013 in the Gemäldegalerie Berlin. Her performance Flaw was shown in the art centre Bios in Athens in 2016. She realised her first sound installation The resonance of the bazaar in 2019 in the art centre Romantso in Athens. In 2020 she presented the sound game Urban Songs in the festival Dance Days Chania. In February 2021, she was a resident artist in the Baltic Gallery of Contemporary Art Slupsk.
BACK
2022