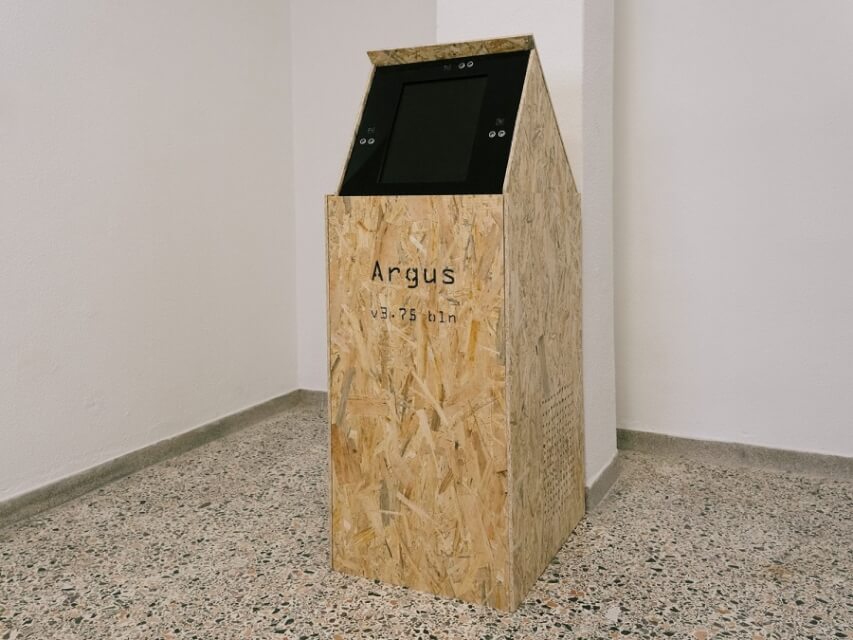 Argus v 3.75 bln is an interactive selfportrait that deals with a society that watches everything while being watched at the same time. The user can destroy its portrait by creating a soundscape. It originates from the Greek myth of Argus Panoptis, a giant with one or many eyes that never slept. Hera had him guard Io, Zeus’ lover. Zeus sent Hermes to set her free. He put Argus to sleep by playing music to him and then killed him. J. Bentham in 1787 named Panopticon his prison prototype model, concept which later was used by M.Foucault to comment on the state control of the people. Argus was named a USA drone that was used in Afghanistan and it has the biggest sensor resolution camera in the world. In 2020 3.75 billion smartphones are used worldwide, making their users both their own guardians and captives.

Nikos Kostopoulos
Nikos Kostopoulos is an audiovisual artist working with installations, video and photography applications, to create works that move between fiction and documentary, and research the information overload in both the physical and virtual public space. He has a MA from AKV St. Joost. He has produced work since 2010 in Europe and Western Asia and participated in international exhibitions and festivals like Art is Hard Thessaloniki 2012, PhotoΜonth Berlin-London-New York 2015, Eye Film Museum Amsterdam 2016, South Explorer Rotterdam 2017, Organ Vida International Photography Festival Zagreb 2017, Electro Arts Festival Cluj-Napoca 2018, Hommes Gallery Rotterdam 2018, Tbilisi Photography Festival 2019, SKG Bridges 2019. He co-founded PHĒNO space for imaginative arts practices in Thessaloniki, a space of production, presentation an education in audiovisual works in contemporary art. In 2020 he was awarded by BIRN to make work on archive of the ICTY. www.votka-exete.com
BACK
2022