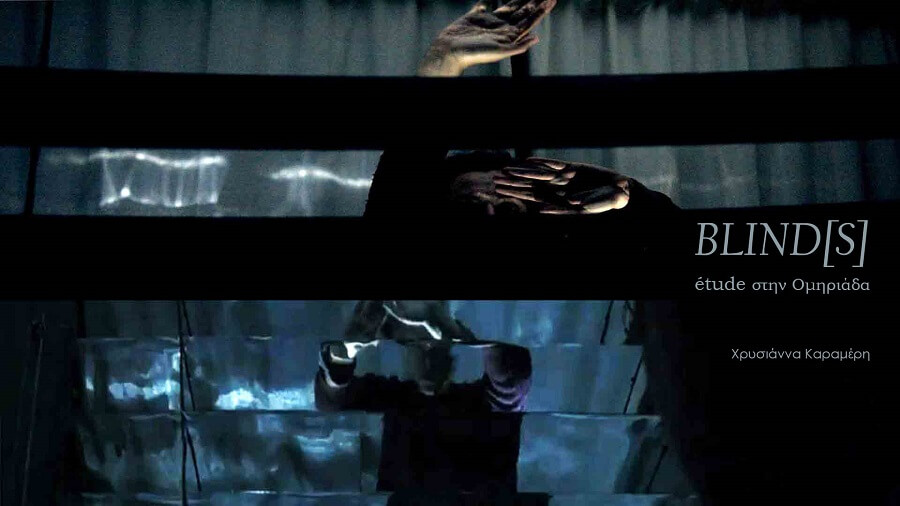 I Ithaca, She Odysseus, I not, I she, I was all and more, Odysseus in empty silence, Where we are we are not, I ask Who am I I ask again and again¨.
The artwork is based on the theatrical work of Dimitris Dimitriadis ¨Homeriada¨. For the author, the real Odyssey is the return to the inhospitable Ithaca, where the whole adventure is re-registered. Does Ithaca reflect the current Odysseus, as he was transformed after his twenty-years of absence?
The Odyssey of modern man leads him to the need to return to the place of his memories, to the familiar, to what he has already done and from which he is determined. The pandemic and the confinement, which coordinated the entire planet, brings us face to face with ourselves. As in Homeriada, in an atmosphere of absence the individual (the collectivity) recognizes itself in the other, as an anti-reflection or even amphi-reflection. Thus the fragmentation of the person is at the same time its completion and Homer of Dimitriadis, the ""olitatos""(wholesomest) and ""kanistatos""(nobodyiest), has no space, no time but is recreated in the eternal. Open to all interpretations, revisions, misinterpretations, readings that have been and will be made. Heterodetermined. That is why always present.

Chryssianna Karameris
"Born in Thessaloniki but her family roots are in Delphi. She is a graduate of the Department of Architectural Engineering UTH, the Higher School of Dramatic Art ""Iakovos Kampanellis"", of Municipality of Agia Varvara and the Lifelong Learning Program OPENART Ionian University. She has held two exhibitions with the work of ¨Ω2, a musical instrument for two¨ at the 82nd TIF, at the 2nd Artecitya Art Science Technology Festival by Helexpo (2017) and at the A.D.A.F/ extending reality co-existence: Art, Science and Technology (2019). She has been a member since 2005 of the vocal expression group, curated by Maria Thoidou, with whom they have: recorded four albums, given concerts and performances in Greece and abroad, as well as workshops in penitentiary institutions such as the Volos Juvenile Education Foundation.She is a co-founding member of the contemporary musical theater composition group ¨ap@rithmisis¨ and a member of Henri Kergomars musical theater troupe ¨Punitotes¨. She has worked as an actor in Greece and abroad, including among others the music-kinetic performance for the exhibition of Pantelis Lazaridis ¨Parkour¨ at the Benaki Museum, the performance ¨Perasma¨(Path) at the Detention Center for Drug Addicts in Thebes with Stathis Grapsas and as directors assistant at ¨Such a beautiful and just case: Haiti/Greece/1821¨ directed by Constantinos Hatzis. Now she is working on her new project, music theater on the National Radio with Eleni Efthimiou, Dimitris Katalifos and more."
BACK
2022