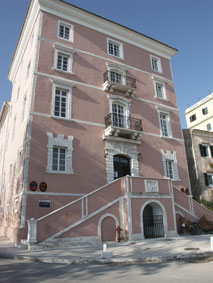 The Ionian Islands (Eptanisa) are characterised by certain particularities in their historical development since the 12th century, in comparison with the rest of Greece. Having been under Venetian, French and English rule, the Ionian Islands have a completely different historical backround compared to the most Greek provinces, which after the fall of the Byzantine Empire became part of the Ottoman Empire until the 19th century and the beginning of the 20th.

These special historical circumstances brought the Ionian Islands closer to the western European ways of life and thinking, which, in turn, left their mark on the urban and rural landscape of the islands, on the mentality of people and their customs. It should be noted that the first Greek University, the Ionian Academy, was founded in Corfu in 1824, under English rule. From the first decades of the 19th century and until the Union of the Ionian Islands with the New Greek State in 1864, the Academy served as the cradle of a unique literary current, which largely contributed to the intellectual ferment of contemporary Greek culture. After the Unification, the Ionian Islands as part of the newly established Greek State, shared a common course with the rest of Greece, in an acknowledgment of the need for internal coherence and uniformity among the provinces of the newly established State. As a consequence, the distinctive character of the Ionian Islands started to gradually fade away. The closing down of the Ionian Academy was only one step of this process.

More recently, new Universities have been founded all over Greece as part of regional development policies. These new Institutions promote scientific fields and methods which have not been approached by Greek Higher Education before. The Ionian University (I.U.), established in Corfu in 1984 according to the above-mentioned policies, aims to contribute to the revival and cultivation of the local intellectual heritage, a heritage partly deriving from the cultural impact of the long-lasting European occupations. What is more, the Ionian University aspires to play a significant academic role as one of the Greek Higher Education Institutions through its educational, scientific and cultural activities.

Since its establishment, the Ionian University has been developing rapidly, was staffed with young scholars and skilful professors, effectively solving the facility problem and taking initiatives in the cultural field. Professors and students enjoy the quality of life in the small island community, the quality of human relations, the opportunity for leisure activities, entertainment and recess in the cosmopolitan atmosphere of the island. The members of the academic staff communicate with their students on a daily basis, monitoring the course of their progress, whereas at the same time they have the opportunity to contribute to the existing and new cultural activities in cooperation with local institutions.

Rector
From the September 2020, Rector of the Ionian University is the Professor of the Department of Audio and Visual Arts Andreas Floros.

The Rectorate offices are housed in the historic building that used to be the premises of the first Greek University, the Ionian Academy (1 Kapodistriou & Akadimias str., 49100 Corfu).

Departments
The Ionian University consists of the following Departments (year of establishment in brackets):

Seven of the departments of the Ionian University, including the Department of Audio and Visual Arts are situated in the city of Corfu, which is renowned for its rich history, urban design and architectural heritage. The city has a population of 40,000 residents. 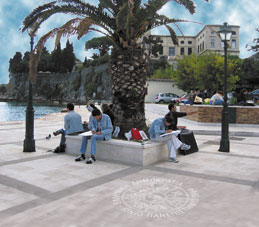 The city of Corfu has maintained its historical urban architecture. It has a Public Gallery, the only Museum of Asian Art in the country, a branch of the National Gallery, a Readers Society, the Corfu Studies Company, the renowned literary magazine Porfyras with the various activities associated with it, the Municipal Theatre of Corfu and an annex of the General State Archives. All these institutions and events are harmonically interweaved in the living tradition which is deep-rooted into the history and the considerable cultural tradition of the island.

Students benefit from the mobility opportunities offered in order to gain experience in studying abroad, through either European Exchange Programmes (ERASMUS/SOCRATES) or organized educational trips and traineeships during their studies. Furthermore, various cultural events take place on an everyday basis in Corfu, and students participate actively in all such University activities, like recitals, concerts, lectures, exhibitions, film screenings, scientific conferences, galas, festivals and lectures open to the public organised by the academic departments. Students who love the theatre and the cinema participate in the Theatre Group and the Cinema Club. University athletics, which the I.U. governance encourages and supports financially, includes a variety of sports (football, volleyball, basketball, swimming, aerobics, track, tennis, etc.), and it has brought distinctions to the University through outstanding performances in many sports.

Every July, the Summer School of Greek Language and Culture and The Summer Music Academy bring to Corfu hundreds of children from all over the world so as for them to enjoy four weeks of getting acquainted with Greek language and culture, and communicating through the language and the art of music.