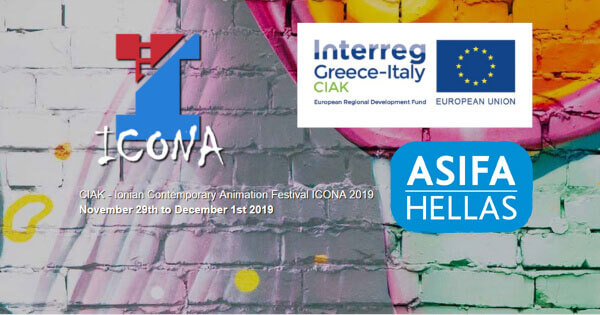 The aim of the Ionian Contemporary Animation Festival ICONA 2019 is to present the best from the field of animation from all around the world. The festival also aims to preserve and help develop the cultural heritage of animated film, contribute to creation of new films, provide ground for potential international co-productions and encourages dialogue between professionals, filmmakers and the public.

ICONA 2019 is organized and promoted by the Department of Audio & Visual Arts of the Ionian University with the support of the CIAK Interreg program:
https://greece-italy.eu/tag/ciak/

Submissions
- Submission deadline: 20th October 2019
- No submission fees!
- Only animation films made after January 1st 2018 can enter the competition. Films selected for the competition will be assessed by the festival selection committee.
Submision platform: https://filmfreeway.com/icona

The attached file contains the Statuses and Rules of ICONA 2019 Festival.