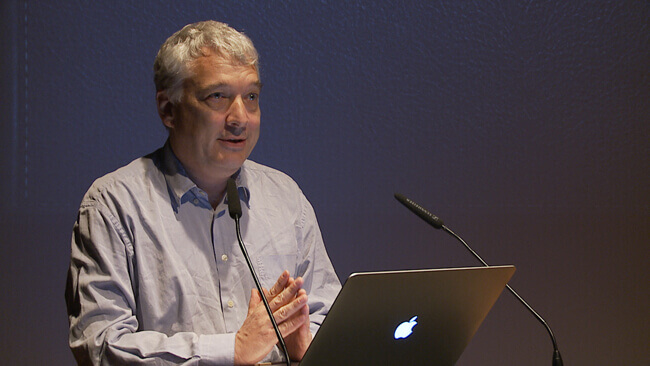 Attending to LAC Virtually: Video Streaming and IRC Channel
LAC-19 will be video streamed at the following URL:
https://ccrma.stanford.edu/lac19/stream.
The easiest way to open this link is to use VLC. Just go in "Media/Open Network Stream."

To interact with presenters during question sessions, we kindly ask you to use the LAC-19 IRC channel:
http://webchat.freenode.net/?channels=lac2019.

On Saturday the 23th of March at 8 p.m. local time (Sunday the 24th of March, 5 a.m. Greek time), during the Linux Audio Conference 2019 (LAC19), that will take place in University of Standford [23-26/3/2019], Ioannis Zannos, Professor and Deputy Head of the Department of Audio and Visual Arts, will present his project entitled IDE Fantasy, which is part of the EASTN-DC project.

IDE Fantasy is short for "Izutsu, or: Daphnis and Echo, a meta-syncretic fantasy". The fantasy combines three seemingly disparate love stories
in a meditation on the theme of Everlasting Love. The stories are: The Noh Play /Izutsu/ (Zeami ca 1400 AD), the novel /Daphnis and Chloe/ (Longus, ca 100 AD) and the story of /Echo and Narcissus/ (Ovid). At the well cradle (Izutsu) of a village, an itinerant priest dreams of the  ghost of a woman that appears dressed in the clothing of her lost husband, to see herself reflected as her husband on the water at the bottom of the cradle.

This is the first public presentation involving three performers in different cities: Iannis in Stanford plays the itinerant priest who dreams about the story in Izutsu, Tasos in Athens plays Daphnis, and Natali in Corfu plays Echo. We attempt to resynthesise the performance  on each of these locations in real time, using SuperCollider for sound and Godot for image, based on data captured by 2 Inertial Measuring  Units (IMU sensors) worn by each performer, and transmitted to all locations via OSC. The animation as well as the data capture on  raspberry pi zero were programmed by Nikos Charalambidis, undergraduate  student at the Department of Audiovisual Arts of the Ionian University.
The technical support in Athens is done by Dr. Vasilis Agiomyrgianakis  and PhD candidate Panos Tsangarakis. Sincere thanks are also due to the
dancers Natali Mandila and Tasos Pappas-Petridis, Ms Mary Randou of the  Garage21 Performing Arts Centre in Corfu and Dr. Giorgos Petras whose  support made this project possible.

Iannis Zannos has a background in music composition, ethnomusicology and interactive performance. He has worked as Director of the Music
Technology and Documentation section at the Federal Institute for Music  Research (S.I.M.) in Berlin, Germany, and Research Director at the
Center for Research for Electronic Art Technology (CREATE) at UCSB. He is teaching audio and interactive media arts at the Department of
Audiovisual Arts of the Ionian University, Corfu. Publications include: "Ichos und Makam" (Comparative Studies on the Modal systems of Greek and Turkish Music, 1994) and "Music and Signs" (edited proceedings of the 1997 conference on Music Semiotics and Systematic Musicology). He performs regularly using live coding techniques with SuperCollider. With Jean-Pierre Hébert he realized the installation Narcissus at the NEME Art Gallery in Lemessos, followed by "Two Worlds". Latest works include the installation "The Secret School" and the theatre/dance audiovisual performance "Osmosis/Migrations", presented in Montreal and Athens as part of EU Project "Performigrations". Further installations on the topic of fugitives were presented in 2016 at the Athens Biennale as part of the project "In Transit", and in 2017 at the "Mind the Fact" festival.

Natalie Mandila was born in Athens in 1981. In 2004, after completing her academic studies at the Ionian University,  she engaged in dance. In 2010 she graduated from the State School of Dance in Athens. Since  then she has participated in dance performances of both emerging and
established artists. Driven by the need of reeducating herself, she continuous to attend  various workshops both in Greece and abroad. In the present moment she  is a student at the University of Pessoa in the field of  Perceptual-Psychoeducation. Since 2012 she lives in Corfu and collaborates with Garage Performing Arts Center (https://www.insidegarage.org) as a teacher, performer and  creator. Her established collaborations are with Eva Randou, dancer and choreographer, with actor/director and animator Giorgos Nikopoulos. and  with Andreas Monopolies music producer and DIY maker. As part of the Residency Program of GPAC in 2016 she has created her first choreographic work, consist by two pieces with the general title “Feral”. (“Feral”, Garage Performing Arts Center, Reborn in Athens Festival, Athens, Arc for Dance Festival, Athens), (“Feral in the woods”, Vida Laska Arts Festiva, Corfu).

Anastasios Pappas Petridis was born in Agrinio in 1994. He is studying on the final year of Greek National School of Dance (KSOT) and he is
also studying on Aristotle University of Thessaloniki in the department of Veterinary medicine. He is an active member of Arthrosis Dance
Company and Hellenic Dance Company. In 2018 he worked with Hikaru Fujii and the choreographer Patricia Apergi during the Onassis Fast Forward Festival 5 (FFF5) in Athens. In 2016 he represented Greece on the International Youth Dance Festival in Macau (China). In 2018 he danced choreographies of Nikos Kalogerakis and Olia Tornaritou on a dance tour in Athens. In 2016 he worked as a dancer in TIF-HELEXPO Thessaloniki as a member of Circus dance company. He is also teaching contemporary dance in dance studios in Athens and Thessaloniki. He has also attended seminars and workshops with Antonis Foniadakis, Guy Shomroni(Gaga technique), Markella Manoliadi, Paul Blackman and Christine Gouzelis, Linda Kapetanea, Konstantina Efthymiadou, Yanis Mandafounis etc

Nikos Charalambidis is an undergraduate student at the Department of Audiovisual Arts of the Ionian University in Corfu. He specializes in interactive performance systems hardware and software with an emphasis on Linux and audio.