Deputy Head of the Department of Audio and Visual Arts, Director of the Graduate Programme "Audiovisual Arts in the Digital Age" 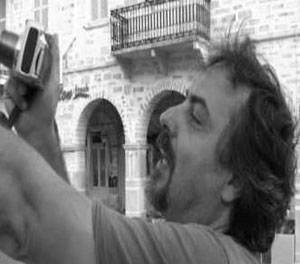 He was born in Athens on (19/02/1967). He studied at the Athens School of Fine Arts (1990-99) at the (E) painting workshop of Nikos Kessanlis and a transcript with G. Ziakas. IKY Scholarship (1994-95) to complete in the Academy of Fine Arts of Seville the workshops, painting, sculpture, applications in each and use. The problem (2000-03) is due to the Postgraduate Interdepartmental Program Digital Art Forms of ASKT in application with the Technical University of Patras. The Visual Arts project is basically in the search for Art Technology as an expressive use of Narrative Language Aesthetic and Philosophical Effort from the moment they interact with the various viewer videos and designs, the new new television images of image and information. He finds his tools in thematic exhibitions by Curators / exhibitions on celebrities in timepieces and in art with judges. Program awarded International Approaches Award in (2004) λυμπOlympic Painting ΄ Damascus, Syria. His works are in private collections, Museums in Greece and Abroad.

He has experience of Interdisciplinary Cooperation and Research for the creation of a three-dimensional medium-length film entitled "Journey Without End" for the canopy on the Planetarium (Eugenidou Foundation) as part of its Cultural Olympiad (2004).

Since (2007) he has been collaborating with the internationally renowned Animation Festival niAniμa Syros΄, he is a founding member of the ASIFA HELLAS organization for Greek Animation. (2019) Artistic Director at the International Animation Festival ΄ICONA΄ in Corfu. Member of the organizing committee of the University Festival of Digital Arts - Department of Sound and Image Arts (2009 to date).

He taught "Digital Media" from (1998-2000) Α.Σ.Κ.Τ., (2003-2009) "Hybrid Media" in the Undergraduate of Α.Σ.Κ.Τ., (2006-2016) "3D Graphics Synthetic Movement "in the Postgraduate Program of PSMT of ASKT, (2007-2016) TEI Athens "3D Animation" at the Department of Graphic Design, (2017) She teaches "Digital Applications" at the Postgraduate School of the Department of Interior Architecture, Decoration and Object Design of the School of Art Studies of PADA. Of Athens. He is an Associate Professor at the Department of Sound & Image Arts at the Ionian University, (2015) a member of the founding team, organizing the Department's Postgraduate Program entitled "Audiovisual Arts in the Digital Age" and its (2019) director. Deputy Director of the Research Laboratory of Interactive Arts - In.Arts (2015) whose main purpose is to contribute to the "Development of Audiovisual Media Research in the context of the wider Artistic Creation". He has supervised more than (100) graduation and thesis at the Academic Institutions where he has worked.

He has participated with announcements in several Proceedings of Scientific Conferences with Research Content of Academic and Interdisciplinary Art Research Technology. He has also passed on the experience through many University Summer Workshops (Workshops) mainly in Greece and Abroad. At the same time (1988-94) he has worked for the advertising company K.A.P.A. for the production of commercials for Animation for Television and Cinema, (1995) until today he is a freelancer in this field with a similar expanded course of spectacle creation. such as cartographic projection, set design with analog and digital media with the latest stage creations on the Lyric Stage and the Foundation ΄ Major Hellenism ΄ (2019-20). Painter lovers of team spirit for innovative collaborations of Artistic Creation exchange of views for the expansion of Artistic Language as a Cultural Culture!