I’ve taken forensic training in outdoor human remains recovery and studies in human decomposition, usually reserved for law enforcement, learning the archeological methods of exhuming human cadavers from the ground. These studies were crucial in my development and comprehension of the socio-linguistic, and biological systems that determine the human body. Witnessing how anthropologists center the human cadaver pelvis, along with other osseous matter, as site of human identification regards to ethnicity and biological sex. Similar to how medical professionals inspect newborn genitalia within the categorization of male or female biological profile, an essentialist, arbitrary system governing the living and dead; the moment a human body is born till their death designed solely for the purpose to hold power in the court of law. This thought further extends to my identity as transgender, as there is no known system in identifying transgender human remains less established “non-binary” newborn criteria.

Following the loss of my grandfather in 2018, who's brother disappeared during an attempt to cross the US - Mexico border, I began     exploring various burial sites of South Texas, recuperating organic material found at the sites and constructing "decaying" installations composed primarily of dirt, mud & clay. During this time forensic recovery operations in South Texas were being conducted by anthropologists, exhuming unidentified mass graves of the countless migrant bodies lost while attempting to evade border patrol checkpoints on the terrains of private ranches in Brooks County. Race plays a major part in my research, claiming anthropologists still apply outdated, eugenic modes of identifying human bodies and remains, in respects to recovering "migrant bodies" and shipping them back to families after analyzing their biological profile. I affirm that contemporary science continues to extract bodily information for the basis of anthropological practice and advancement, perpetuating the binary and racial modes of identification, inevitably grounding the interests of US law enforcement & legal systems.

From 2017 - 2019, I began experimenting with DIY biotechnologies, integrating them into installations and performances, extracting DNA from human spit while being chained up à la bdsm in nightclubs, transporting burial site microorganisms into domestic and gallery spaces. These actions have received pushback where the artwork has been shown, from both art professionals and scientists. The reactions only amplify the questions the artworks are designed to ask, challenging the white cube's sterilization, and the historical treatment of "contaminated" biological objects and "hazardous" bodies, specifically queer trans, brown bodies, their spirits and existence. It is not the actual material, bacteria and fungi, they are afraid of, it is the way I describe the pieces both biologically and politically, the fear is in the language. 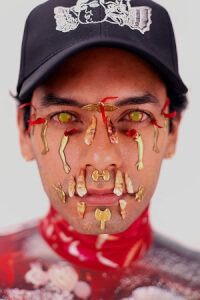 Angel Lartigue
100. Science at the Club (Angel Lartigue)
Angel Lartigue is an artistic researcher born and raised in Houston Texas. Lartigue's work explores the relationship between the body and land through the use of "putrefaction" matter as raw material. This concentration has led them to experimenting with processes of decomposition into artworks, incorporating fungi, insects, and even odors captured during fieldwork, including research training in human remains recovery at Texas’ “body farms” in 2018. Designer of 2017 label book, "La ciencia avanza pero yo no" is part of the Museum of Fine Arts Houston’s Hirsch Library rare books collection. Lartigue was accepted as honorary research fellow to artistic laboratory, SymbioticA, part of the University of Western Australia Perth for 2020. Photo credits: Tere Garcia
Angel Lartigue
Back