97. Of Atoms and Reincarnation - About the Creation of knowledge
Session: Session "NSP5 / (W)Hole"
Speakers: Daniela Brill

“Science is made by men, a self-evident fact that is far too often forgotten. If it is recalled here, it is in hope of reducing the gap between the two cultures, between art and science” (Ruth Ananda Ansehn, World Perspectives)

I have been visiting and working together with scientific institutions and research centers around the world for some years. I've spent over two years working in collaboration with scientists from CERN to develop my own artistic hypothesis about matter. 2019 I graduated from the Art and Science Master at the University for Applied Arts in Vienna with a thesis that proposed a new fundamental force of nature which is scientifically unnecessary and simultaneously coherent to the discourse and the knowledge of particle physics. It is a poetical statement that out of an artistic idea a scientific hypothesis can emerge. I went deep into particle physics, worked at their spaces, communicated with researchers and learned their language, and I dared to bring a scientific hypothesis to the table being an outsider to the scientific world. I believe that there is a fourth force in nature. Like the gravitational force, strong force and electroweak force. I have called this force “Force of Embodiment”, due to its steering purpose, meaning that its task is to steer the atom, molecule or system to the new body it will create. The letters F.E have another meaning:, in Spanish, my mother tongue, fé means faith, or believe. And this hypothesis is mostly based on that, a hunch that the force exists.(1)

I theoretically followed an atom of hydrogen back from the LHC at CERN to its creation through nuclear fusion during the big bang. Qualified as “poetic but not scientific” in the physics world, and being proud of this qualification, this hypothesis opens up a discussion on how far arts can imagine into the world of particle physics.(2) Almost one year after the presentation and performance at the HEPHY Institute in Vienna, at CERN during the CMS Week in June 2019 and at the European Physicist Conference at Ghent in July 2019, I would like to write a paper on the juxtaposition on one side of artistic, esoteric, metaphysical and on the other side of scientific, exact and pragmatic thinking during the creation of new scientific (and artistic) knowledge. I would like to conduct a series of short interviews with scientists and artists (One or two of each, possibly with: John Ellis (particle physicist, CERN) Barry Barish (Nobel Laureate 2017, Ligo Experiment), Victoria Vesna (Artist, UCLA) and Paul Vanouse (Artist, University at Buffalo)), and explore the creative processes, their parallels and differences, and maybe even find overlapping moments. What do they think about creative people outside the hard sciences imagining and proposing new ideas around a topic they have not studied academically but empirically? What are their different reactions to my hypothesis about the Force of Embodiment? Where is the limit for artist working with science? What if science was done by artists?

(1) Quoted from the peer reviewed abstract of the Master Thesis:

(2) Quoted from the peer reviewed abstract of the Master Thesis: 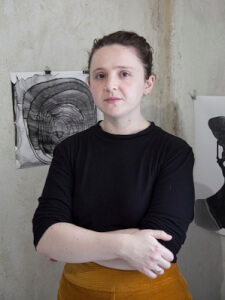 Daniela Brill Estrada
97. Of Atoms and Reincarnation - About the Creation of knowledge (Daniela Brill)
96. All You Have to Lose is Ecstasy: The Intuitive, Occult and Somatic as Methods of Inquiry (Monica C. Locascio, Pêdra Costa, Zosia Hołubowska, Florentina Holzinger, Daniela Brill Estrada and Elisabeth von Samsonow)
Daniela Brill Estrada was born in Bogotá, Colombia. She finished her Master’s degree in Art & Science at the University for Applied Arts Vienna, with her own hypothesis about a new fundamental force in nature written from an artistic and poetic perspective. Brill works in collaboration with artists, researchers and scientists around the world and institutions such as CERN and the ORIGIN network. Through her artistic work, Brill proposes a space where the frontiers between natural sciences, poetry and fine arts disappear. Daniela is also the creator of Cuántico and co-organizer of Suratómica, an international, self-organized network of individuals, collectives and organizations that propagates scientific and artistic thought. With a focus on Latin America and the Global South, the Suratómica network promotes new forms of dialogue between different areas of knowledge, opening spaces for creation and experimentation to strengthen reflection on science, society and alternative forms of organization.
Daniela Brill Estrada
Back