The proposed paper concerns the research of the Centre of New Media and Public Feminist Practices (CPFP) based in Greece, University of Thessaly. The CPFP focalizes on research and research-based art and curating, regarding feminism, technology, discomfort and theoretical militancy as creative oppositional potencies. The significance of CPFP research is that it aims strategically to urgent feminist issues within the current technological condition. Our methodology is built upon Materialist and Neo-Marxist theory and New Materialism, in order to address the insisting critical issues, regarding economy, labour, the rise of cultural industry and the waste of human capital as those are expressed anew in power and biopolitics. Our research investigates and brings forth the potential of affirmative ethics, which underlines the ‘desire of becoming’, away from the despair of the vulnerability of mortality, death and extinction, as political force. The case studies of the work presented in the paper is an examination of how we can understand feminist art as an active part, a mutation force against the imperatives of cognitive capitalism. We will present artworks developed in CPFP, by artists and collaborators, Vasileia Stylianidou, Panos Sklanvenitis and Valia Papastamou. Those are presented as case-study-narratives using various artistic methods, multimodal methodological tools and strategies, acting as implements for political post-digital affect and sensibility in the cognitive globalized economy of the artworlds today. More particularly, the video performative reading of Stylianidou, focuses on two violent female murders*, which happened recently in Greece. The work brings forth a new materialist approach, which describes the ‘transcorporeality’ between subjects and objects, the permeability between humans and others-things, such as electronic devices- with which it is enmeshed. Her work and methodology questions spectatorship for those involved, proposing an affecful visibility. The work of Panos Sklavenitis, Don Quixote derives from the celebrated novel, which has inspired an alternative 'manliness', whose variety of readings exposed a radical critique of the patriarchal constructions of masculinity and femininity. In Sklavenitis work as it happens in the original Cervantes novel, the reader can hear the different positions of the heroes, thus, one can hear Pantha's donkey's view, or rather the donkey's fantasy of an alter ego; a hybrid that resembles a sort of scientific genetic experiment and of which Sklavenitis draws a digital portrait. This creature is a catalyst in Sklavenitis' version of Don Quixote, as it works sweepingly over the idea of 'alternative' modes of existence. The alternatives will always be located within the patriarchal canon while the donkey's 'experience' presupposes a blasphemous post-human transcendence in consciousness. The work of Valia Papastamou develops a digital infrastructure which will interconnect feminist practices of art and activism not only as an actual archive but as a work of art which aims at the poetics of articulating, looking at the same time at the interconnections between actuality and virtuality. Papastamou proposes a mechanism, a bot which acts as a parasite in the social networks and uses web crawling and the dissolution and differentiation of the collected information, leading to the emergence of a larval subject-a hybrid collective storytelling. 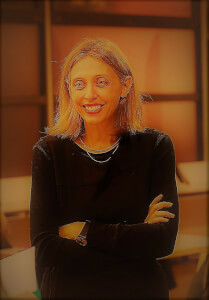 Elpida Karaba
94. Mutations in Feminist Aesthetic Practices. Three case studies form the Centre of New Media and Public Feminist Practices. (Elpida Karaba)
Elpida Karaba is an art theorist and independent curator. Her work and publishing record is focusing on the relationship between art and systems of knowledge, archival art and art in the public domain, history and theory of art, feminism and performative, research based and activist artistic practices. She is visiting lecturer at the School of Fine Arts, Athens. She is head of research at the Centre of New Media and Feminist Public Practices (www.centrefeministmedia.arch.uth.gr/) at the Department of Architecture, University of Thessaly. In 2014 she has initiated the Temporary Academy of Arts (PAT), a para-institution, a hybrid of artistic, curatorial and paedagogical practice.
Elpida Karaba
Back