This presentation aims to analyse the correlations between post-porn, transfeminist politics and artistic hacking practices exemplified in the work of Quimera Rosa, a ‘nomadic lab’ created in 2008 in Barcelona within the post-porn artistic scene.

Since 2016 the collective has been working on Trans*Plant, an on-going project that developed various strands of research and artistic experimentation. The project involves a human-plant transition from both scientific and speculative fiction scenarios through installations, collaborative workshops and performative actions, such as injecting chlorophyll intravenously (May the chlorophyll be with/in you, 2017) and implanting a chip to register the new identity and transition process into a plant-cyborg.

In this presentation I will make the case for how Quimera Rosa’s engagement with plants extends their post-porn art practice and transfeminist politics into Trans*Plant. Post-porn has been subverting the sexual and gender roles of mainstream pornography to formulate ‘[other ways] of knowing and producing pleasure through vision and body-machine assemblage’ (Preciado, 2009: 30); transfeminismo has been articulating ‘new minority discourses’ that focus on individuals that ‘traditional feminism hasn’t fully addressed as political subjects’ (Egaña and Solá, 2016: 75) and it has been developing in Spain close to ’friends and companions in activism’ (ibid). 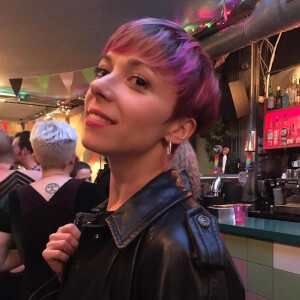