Volumetric Black: Post-Cinematic Blackness is a research document, and companion practice-based installation that both enumerates and critiques existing production limitations of digital blackness in [screen] technology. The essay proposes a radical solution on the issue I frame as post-cinematic blackness, an understanding of visual-spatial perception developed from the cantankerous—literary polemics on Western architecture by Tanazaki, properly situated in the praxis of speculative design. I make the presupposition that perhaps the televisual depictions of black bodies we’ve collectively accepted as mediated—digital reflections, have permanently altered any objective possibility for a standard viewing of a post-cinematic blackness that isn’t grounded in white normativity. The former being a fabricated process of illuminating black bodies in screen-based media with white light, leaving the black form and expressions washout and unnatural in appearance. The essay begins with a basic premise—what is the actual color of the black body when compared with its digital index of RGB spectrum? What is authentic visual blackness in this digital age, and what would happen if we decided to start over? The document builds from three main radical sources to suggest a new speculative possibility and frame of thinking about post-cinematic black visuality. From Jun’ichiro Tanizaki’s “In Praise of Shadows” – 1933 and his taxonomy of disparities between Eastern and Western architectural sensibilities, to Franz Fanon’s Black Skin, White Mask” – 1952 as the framework for how black bodies are—seen and how they experience—being—seen, and last Andrew Dosunmu’s 2013 film Mother of George” – 2013. A cinematic wonder that allows for the real-time development of black bodies to appear in perpetuity. I state in the essay, “Perhaps it may seem on the surface, a crass exercise to span eighty years, at least three cultures and three continents in search of context, parallels, and an argument for an aesthetic of cinematic blackness, but I assure you, there is grounded reasoning.” A portion of that grounded reasoning is fostered by the document’s accompanied programmed installation which focuses on the computational inadequacies that produce misrepresentations of visual blackness in digital media. A sharpened critique for the technological limitations of RGB spectrum to accurately produce black skin tones in digital spaces. The document closes with a series of new and unanswered inquiries, yet an optimistic possibility for a creative remaking. Can we envision the birth of a material substrate developed in place of, or simultaneously alongside photosensitive film stocks? A celluloid strip, or CMOS chip that embellishes and expands the representations of black bodies in low light. A material substrate that distinguishes between the many hues of blackness and registers them as they are seen. What effect would an alternate history of this magnitude have on the way we see ourselves? Volumetric Black reimagines what the visual experience of viewing black bodies on televisual displays could be in the 21st century. 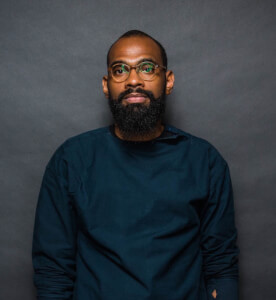 Triton Mobley
9. Volumetric Black (Triton Mobley)
Triton Mobley is a new media artist and researcher whose interventionist works, and guerrilla performances have been exhibited at CURRENTS Virtual Festival, Geidai Games Online at Tokyo University of the Arts, Art Basel Miami and staged in New York, Boston, Providence, and across Japan. Triton’s praxis culls together critical making methodologies across performative installations, programmable fabrications and speculative industrial design—fashioning polemical art object assemblages that engender public reexamination. Triton holds an MFA in Digital+Media from the Rhode Island School of Design and is a PhD candidate in Media Arts + Practice and Annenberg Fellow at the University of Southern California. He is currently Assistant Professor of Studio Art Core at the Lamar Dodd School of Art in Athens, Georgia. Triton’s research is framed within economies of digital perceptions + cultural optics—problematizing notions of being situated between the discontinuities of emergent technologies and communities of marginality.
Triton Mobley
Back