Animals, in contrast to humans, will always retain some of the characteristics with which nature endowed them. This is what is usually argued. Therefore, animals that have been removed from their natural environment unquestionably preserve their "animality" as long as they are placed in zoos. Similarly, animals that have been artificially inseminated preserve some natural attributes that humans supposedly no longer need. With minor editing, the above sentences might encapsulate the history of the theory of photography. Here, too, one also comes across poetic descriptions of an unbreakable link with nature, a connection that is sacred, preserved and embedded in vague descriptions of a mechanical, automatic, or causal relationship. For this reason, even contemporary orthodoxies have failed to extricate themselves from the belief that the main function of the photograph is the fact that it is a perfect illustration of aping: human action mimicking natural action, a monkey in human clothing.

But if “imitative representation of the real world in art and literature”, mimesis, can be defined as the summit of human creativity, as art history has claimed since the Italian Renaissance, then it is arguable that animals may also exhibit creative agency, even when they are in their natural environment, have no artistic intent in the sense that we human beings might accept, and have no need for intellectual property. Exploring this circumstance is the point of this essay. At its heart stands a case known as The Monkey Selfies - a series of head and torso photographs of a Celebes Crested Macaque, taken in 2011 in a forest thicket on Sulawesi Island in Indonesia. It is supposedly the monkey that created these photographs after having seized the opportunity to snatch a camera and escape from its owner, the nature photographer, David Slater. After Slater had retrieved the camera, he found some intriguing photographs on its memory card. The published photographs show the smiling face of a slightly greying monkey whose large amber eyes are gazing directly at the camera. In one photograph, the monkey is seen sitting on the ground while holding out his hand towards the camera, and the thick green vegetation in the background is slightly blurred, as is customary.

Different judicial jurisdictions hold conflicting positions with regard to copyright on works created by animals. This paper argues that the most interesting question in the context of this event is not about the copyright to the images but the very emergence of a controversy over the matter, and the assumptions that motivated it. The controversy, it must be noted, concerns only the theoretical rights that humans are willing to grant monkeys. Unfortunately, these rights are backed up by the implicit assumption upheld by contradictory legal opinions, that every human action necessarily demonstrates agency and is therefore entitled to protection by virtue of its inherent creativity. Arguably, this incident requires us to restructure the quadrilateral and complex relationship between the natural, the animal, the human and the technological in the contexts of creativity and artisthood. 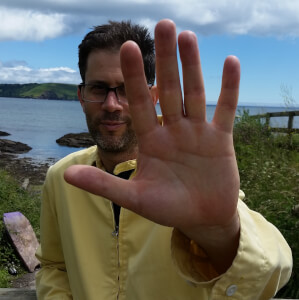