This presentation considers scientific data and methods taken as a vocabulary for a visual language of poetics, an artistic practice exploring the liminal poetics of space, time, science, and mythology, equally considered. These artworks focus on the moving image as an immersive, architectonic construct, one that makes it possible to blur the boundary between space and time – cinematic environments that create a space of spatial and temporal ambiguity, open to the performative role of the viewer in composing the unfolding narrative. The artworks presented here began in the process of crossover between art and science, technology and society, exploring topics and incorporating methods from each area.

Transdisciplinarity plays a critical role in this artistic research. My works reflect cinema approached as a multimodal field of possibilities in which montage motivates movement and focus through this field, creating a participatory composition of sight, sound, movement, and memory that immerses viewers by actuating somatic perception. Shape, scale, immersion, interactivity, simultaneity, embodiment, implementation, and the manipulation of time create concrete metaphors that echo the multivalent content of the works: a collaboration with 300 tropical spiders to create a Kino, then letting the audience walk freely among them (or the spiders freely among the audience);(1) an immersive environment enacting the space-time of glacial ice to experience the time of a different form of matter as somatosensory experience;(2) a journey through the human history of the Moon, transcending time, political ideologies, realities, and cultures as an encompassing field of simultaneous views and sounds;(3) performing a two thousand year old act of Thessalian magic on the skyline of Hong Kong.(4)

Combining the technological tools available to cinema and to science, contrasting magnifications and speeds of observation reveal a material poetics beyond appearance. The artworks presented here elaborate the details of cardinal subjects, diving deep into fundamental domains to unravel the cultural implications embedded within the aesthetics of their data artifacts. 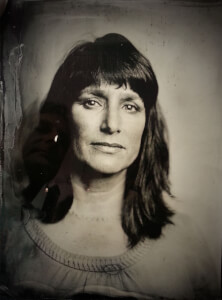 Clea T. Waite
84. Somatic Poetics (Clea T. Waite)
Clea T. Waite is an intermedia artist-filmmaker whose works investigate the material poetics at the intersection of art and science. She creates immersive, cinematic works engaging embodied perception, dynamic composition, and sensual interfaces – as well as one inter-species collaboration with several hundred tropical spiders. These works examine climate change, astronomy, particle physics, history, feminism, and popular culture. Waite has a Ph.D. from USC in Media Arts + Practice, combining a background in physics and computer graphics from the MIT Media Lab with practice and research in media art theory. Waite’s artworks have recently been exhibited at CODAME San Francisco, on the ICC Hong Kong, the Miraikan Museum, Tokyo, and the Boston CyberArts Festival. She has been a Humboldt Fellow, a Radcliffe Fellow, CERN artist-in-residence, and fellow at the Academy of Media Arts Cologne.
Clea T. Waite
Back