‘Nature‘ as a historic and scientific concept and as cultural phenomenon has undergone a major shift since the Anthropocene. The term ‘nature‘ itself is questioned; different theories of post- (human) nature have become more and more influential during the last decade as is well-known. Ecological theorists, such as Timothy Morton, think, that we actually live in a post-natural age, proclaiming ecology without nature, or T J Demos, for instance, analyzes the current period of ideological change as one of rethinking nature as being part of us, not something external. This includes the continuous growth of interconnectedness between nature, techniques and the human body, leading to a redefinition of what is human and what is nature.

Already in 1968, Jack Burnham, in his survey work Beyond Modern Sculpture, connected the history of sculpture with technology thus moving it away from anthropomorphism. He understood sculpture as a mirror of the current state of knowledge in biology and technology with the potential to design life-simulating systems. According to Burnham, the history of the development of sculpture, whereby sculpture culminates in its productive exchange with technological and scientific achievements of the time, must take into consideration positions beyond the conventional canon: dolls, automatons, and cybernetic art (“Cyborg Art”).

Taking this into account, I would like to discuss three artistic positions between cyberbiology and artificial intelligence, fusions of human beings and analytical machinery and the ancient human dream of creating new, artificial life, thus shaping a liminal concept of nature. Whereas Ian Cheng in his Emissaries (2015–17) constructs digital species with their own life cycle via AI in a dystopian, apocalyptic nature, „that have a sense of aliveness” with a speculative future, the artists duo Morehshin Allahyari & Daniel Rourke proclaim a new post-humanistic age in their film The 3D Additivist Manifesto (2015; 10:11 min; https://additivism.org/manifesto). 3D printing here embodies the primacy of creative, digital technologies, the simulation, synthesis and excess of algorithms that lead into a new material aesthetics of vibrant matter interfering with human organisms in an utopian way: “We call not for passive, dead technologies but rather for a gradual awakening of matter, the emergence, ultimately, of a new form of life.” Andreas Greiner, the third artistic position, uses AI and deep learning processes to reexamine contemporary concepts of landscape. In Jungle Memory (2019), Greiner applies a custom programmed AI on many thousands of forest images to re- interpret prevailing conventions of (nearly lost) nature. Here “nature is not perceived by human senses, but rather through a Deep-Learning Algorithm. Artificial Intelligence can thus be understood as extending the ‘human gaze’ on nature.“

Ian Cheng, Morehshin Allahyari & Daniel Rourke and Andreas Greiner, they all show in different ways how techniques may or already have become dominant in modeling and modifying nature, thus allowing new forms of hybridity. Using these three case studies, I like to discuss the technological appropriation of (post-)human nature leading to varying concepts of liminality. 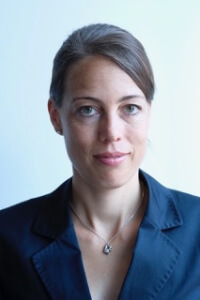 Ursula Ströbele
82. Concepts of liminality in (post-)human nature (Ursula Ströbele)
Ursula Ströbele is in charge of the Study Center for Modern and Contemporary Art at Zentralinstitut für Kunstgeschichte (ZI) in Munich, a freelance curator, and an author. She studied art history, information science and business administration before receiving her PhD at Heinrich Heine University in 2010. Recently, she served as artistic director of Kunstverein Arnsberg (2019), and held a post-doctoral position at the Institute of Art History and Aesthetics (2012-18), in Berlin’s University of the Arts. In her habilitation project she works on the sculptural aesthetics of the living, and focuses on sculptural phenomena at the interface of natural sciences and computer technologies, non-human living sculptures, and digital, time-based sculptures since 1960. Ströbele co-founded Theory of Sculpture (2015-20), a Deutsche Forschungsgemeinschaft-funded scientific network and curated a research exhibition on Hans Haacke‘s early biological systems at ZI and Museum Abteiberg, Mönchengladbach (2019/2020).
Ursula Ströbele
Back