In my presentation I would like to focus on affects expressed by David Wojnarowicz in his writing and some of his visual works. Described by Olivia Laing as a “dispossessed flaneur,” Wojnarowicz roams the American urban landscape in search of immediate contact with reality. As a result, he becomes an acute observer of the disregarded social sphere inhabited by nomads bereft of any livelihood. David Wojnarowicz’s textual rendition of this world is full of abandoned human waste; its depiction is thus based on violent imagery: in its language, structure, affects, and reality presented. The primary preoccupation of this speech is with the indirect, yet having “real” ramifications, variety of violence Wojnarowicz deals with – the kind whose outcome could amount to (symbolic) death, not an obvious corporeal death but the death of subjectivity and thus of symbolic existence. In the introduction to Close to the Knives (2017), Olivia Laing mentions a well-known photograph taken by Wojnarowicz and used as a cover image by the Irish rock band U2 for their third single from the 1991 album Achtung Baby. The picture of falling buffalos, which is the one employed on the cover of the single “One,” is a very poignant and highly symbolic representation, coming from a non-mainstream artist, which popular culture has absorbed, yet the author of the photograph is unknown to most. 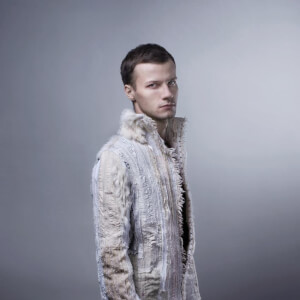 Krystian Gradz
78. Affective Mapping of David Wojnarowicz's Work (Krystian Gradz)
Krystian Marcin Gradz is an Assistant Professor at Szczecin University, Poland. He received his PhD degree from the University of Warsaw with a thesis on the representations of death in contemporary American literature. His research interests include negative affectivity, conceptualizations of death and dying as well as aesthetics and politics of bodies. He has published numerous academic works on such topics as performativity in contemporary literature and representations of despair and melancholy.
Krystian Gradz
Back