This paper introduces Perception++, a concept that describes human perception that is amplified, enhanced, and extended. Through the utilization of assorted computational, digital, organic, and biological systems and their interconnected associations, we are asked to reconsider and re-evaluate the “vanilla” biological sensory and perceptual apparatus. Here, we will view a comprehensive and critical analysis both on the theory and philosophy related to the mind, perception, and reality, but also reflect on artistic and scientific practices that utilize nascent technologies to amplify perception and cognition.

Perception++ has a thorough understanding of sensoria, that is, all modes of sensing that emanate from central and peripheral nerves, while further attempts to utilize prosthetic devices, electronics, cybernetics, augmentation, neuroscience, and computational media with an aim to alter the conceived norm, and create all possible links between their systems and properties. This results in explorations that i.e. calculate data through a body’s skin, extend visual perception using a tongue, or enhancing emotional responses of distant bodies through telematic and wireless networks, to name a few.

This work analyses how Umwelten (environments / perceived realities) are formed, by dissecting biology, phenomenology, and perception of technology which extends the self through artefacts, mediations, and quasi-other states. Technological augmentation becomes a main route in establishing cyborgian practices of scientific and artistic inquiry that engineer the body and fabricate hybrids with prosthetics, wearables, bionics, and implants. Wetware practices demonstrate options and possibilities of an immediate association between computational and biological systems with a goal to optimize and enhance, alter, or substitute aspects of cognitive and perceptual performance (optogenetics, electrical stimulation, implanted enhancements). Biohacking further pushes the boundaries of biological “normality” by fusing notions of transhumanism and techno- progressivism in areas such as sensory substitution, or extrasensory perception.

Synthetic chemistry and biological enhancements are also discussed in this paper, as they provide a range of options to improve memory, mental performance, mood selection or intelligence amplification. Scientific studies, artistic methodologies, and philosophical implications are referenced in more detail; i.e. research developed in the Centre for Psychedelic Research at the Imperial College London, Roy Ascott’s analysis of the 4Vs (Validated, Vegetal, Virtual, Variable Realities), and the Hedonistic Imperative Manifesto of David Pearce.

Finally, the work discusses uses of telematics, cloud services, cognitive computing, uploading, and Artificial Intelligence as important components of Perception++. The understanding of reality emerges from chemicals and electrical stimulants that are triggered from the syncretic relationship of the physical environment and a wide range of distributed algorithms stored on remote and distant locations. Advanced computational systems become part of our perceptual apparatus that redefine our experience, and augment the formulated consciousness.

In summary, this paper provides a comprehensive investigation of Perception++, an extended, enhanced, and amplified noesis that utilizes a range of technological advancements to propose, provoke, and establish a framework for exploring the abilities and possibilities of the contemporary human perception, contextualized through scientific studies, artistic works, and philosophical explorations. 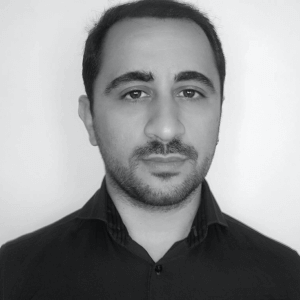 Stavros Didakis
73. Augmentations of Perception++ (Stavros Didakis)
Stavros Didakis is an Associate Professor in Interactive Media Arts at New York University (NYU Shanghai), and a senior researcher with the Institute of Digital Arts and Technology (iDAT, University of Plymouth). Stavros’ practices focus on the speculation of technological futures with a focus on the development of architectural augmentations and inhabitant personalization, exploring sensorial interfaces and technological frameworks as extensions of human environments. Stavros has won grants and awards in creative technologies, he has exhibited his interactive works in international exhibitions and biennale, and he has made numerous publications in conferences, journals, and books.
Stavros Didakis
Back