“A.E.B.” is a proposal for an artistic performance focusing on nutrition, which seeks to let us think about nowadays subjectivity related to the modern rituals of consumption. A first sight would point to the fact that we live in a time in which the lack of rituals is connected to the mere assimilation of substances, a time in which everything can be seen and perceived as a product, where things elevated to the state of product are de- prived of their original form and the source becomes meaningless.

The Individual goes through his life living in an advanced state of denial which takes him in the condition of not wanting to see the real price of things and actions. In Psycho- analysis it is called “disavowal”: rejecting the reality of a perception on account of its potentially traumatic associations. This mental act might be fed by an illusory feeling of freedom given by a certain global ideology that today has established itself in the world.Expressions of “freedom” are made on a daily basis and consumerism becomes a dis- course about identity.

Nutrition is an everyday cultural and technological act which follows precise political and economic ideals. Food industry makes the production and consumption of meat free from many physiologic and psychological constraints such as growth timing. Anti- biotics, steroids and other technologies applied, have mutated the rhythm of this sub- stance not having considered the cultural and psychological load linked to it.

“A.E.B.” wants to sustain the need to re-interpret the vision of ourselves as a species, overcome the idealization of nature and as a consequence the vision of our place in it. There’s the need of programming the way in which we design goods and therefore our own identities taking account of a wider range of possibilities, boundaries and needs. The intention of a design must be expanded considering the complexity of the entire context.

Food is taken as “case study” representing that very necessary daily act, capable of making us understand the weight of each choice. Clean meat is a promising technology that will probably transform the food industry and help solving some of the environmental problems we live, but what is still missing is an ethical and aesthetical foundation for such conquests; there is a wide gap between our understanding and our technological progresses, the scientific capacity doesn’t possess a correlated social maturity.

The performance pictures an appetite and the sacrifice which stands behind it; a man that becomes human through a ritual that puts himself at the very center of its own consumption cycle. The ritual proposed is a meal, one particular occasion in which a regenerating component of our body is taken, processed and eaten. The regenerating part is our blood, which represents our own flesh and it concretizes the value behind a product. An act which suggests that freedom can be discovered from constraints and

understanding the rhythm of matter, the value of it, can be fundamental to build a con- temporary human identity. 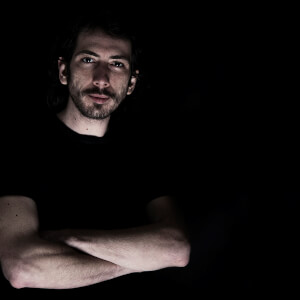 Michele Daneluzzo
70. Adapt Evolve Become (Michele Daneluzzo)
Michele was born in 1988 in Pordenone, Italy. He earned the Master degree in Industrial Design in 2015 under the supervision of the Professor Paolo Piva at the University of Applied Arts in Vienna. During his growth he matured a strong personal idea about what today is “lightly” understood and interpreted as “Design”; core of his interests, he’s defining it as an essential element for understanding what it means to be a Human Being. Michele is co-founder of “Nyxo”, Architectural and Product Design studio which the ambition is to re-territorialize design as a tool to discover the horizon of new knowledge. His “Design Language” is enriched by a strong emotional and semiotical property, reflecting his interest in the “Humanities”. His work has been internationally exhibited and awarded in different events and museums, including the Cooper Hewitt Design Museum of New York City.
Michele Daneluzzo
Back