Video art as a conscious practice appeared in L’viv, the biggest city in the west of Ukraine, in 1993.  Artworks produced during this year became the quintessence of the artistic processes of the late 1980s and early 1990s when the Ukrainian SSR painfully but irrevocably turned into Ukraine. It is not surprising that critics have noted that the art of that time was dictated by the needs of transgression, and this transgression is observed in the key works of that time. The transformation of the Soviets into something new or the reclaiming of the forgotten past (as European nostalgia or peripheral experiences) was accompanied by burlesque rituals and carnival buffoonery. Artworks produced in the city in 1993 showed that artists rethought the role of the work of art and its relationship with the social body, and in many works, we see the plot of transformation or transgression, especially accompanied by a video camera. 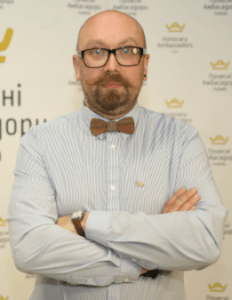