67. MPASTURAVACCHE. The taboo of meeting the chimera of oneself
Session: Session "NSP12 / Epic"
Speakers: Jatun Risba

During the art residency at STEAM Atelier in summer 2019, Jatun Risba devised and launched the one-to-one performance ‘Mpasturavacche. The milk suckling snake’: an Art and Science performance that lets people explore the sensory abilities of snakes through wearable technologies.

By disclosing the instincts and impulses of the lizard brain in the human animal, the artwork makes sense of and alleviates human’s current estrangement from the animal world. During the performance, the artist/performer and the attendee/co-performer are linked by an “umbilical cord” that acts as a communication channel between the  two. The attendee receives a headset for virtual reality with thermal vision, an Arduino board and a highly sensitive voice sensor mounted close to the mouth. The device is connected to the artist, where a wearable technology system, made of micro motors mounted on a piece of isothermal textile, pulses in time with the visitor’s breath. The louder the sounds made by the co-performer, the stronger the vibration of the “serpent” and the dialogue between the two. The performance explores the ancestral communication systems of reptiles and their impact on human perception and behaviour. The intimate setting of the performance awakens and challenges the sensory nature of the communication and signification in the human [and more-than- human] animal. After the first public presentation in Galatina in S Italy, the performance  ended up being cancelled from the major of the municipality of Arnesano two hours before its start. After this incident, the artwork was presented, while facing different controversies, on two other occasions: at the festival Pixxelpoint in Slovenia and in London. This artist talk will look at the surfacing effect of this liminal performance.

On one level, the experience has shown that ‘Mpasturavacche’ has the ability to unfold the collective unconscious of a city, region or nation (depending on the scale and on the geopolitical implications of the site). On the other, the encounter with mpasturavacche mirrors the inner world of the singular co-performer or attendee. That’s why, the performance is extremely intimate. To sum up, the artwork is simultaneously both context- and person-specific. Outwardly, it is the artist-performer who is naked and vulnerable. The visitor is given 15 minutes to freely scrutinize and correspond with the artist, with or without the use of the headset. During this time, mpasturavacche maintains a firm eye contact with the co-performer for the entire duration of the timeslot. The continued high level of attendance puts the artist-performer in an oracular power position from which not only the clothes of the visitors get shed, but their skin. It follows that the artist creates and holds a space of shared vulnerability where the innermost personal impulses, frustrations and thinking patterns of the attendees can be revealed, self-acknowledged, dropped off and dealt with in a subsequent moment. Moreover, the use of the VR device and wearable sensors introduces a further level of complexity. By creating a snake-like umwelt, the artwork investigates and challenges the supremacy of human-centric perspectives and the potentially mind-baffling consequences of technological fetishism. 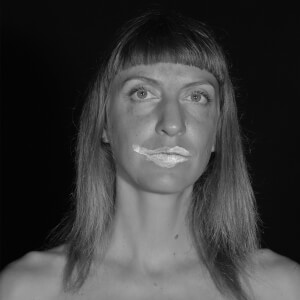 Jatun Risba
67. MPASTURAVACCHE. The taboo of meeting the chimera of oneself (Jatun Risba)
Jatun Risba ('ki') is an artist of self, linguist of kinship and joker exploring beyond human paradigms. By approaching Art, Science, Technology in terms of ritual mysticism, ki recovers ecopoetry and magic in contemporary societies. Since 2014, Risba has been developing the practice of 'Interesse/Dance of Life' which consists of liminal somatic & vocal expressions in a state of trance. These 'arts of self', enacted among and with others, create opportunities to reveal, share and immunize oneself while acknowledging the divine comedy of life. Through developing a vernacular form of English named 'Language of Kinship', whose grammar is based on the use of alternative pronouns ‘ki’ (sing.) and ‘kin’ (poss., plur.), Risba is extending the notion of selfhood to all spectrums and forms of life. Risba holds a BA Hons from NABA, Milan and a PGC in Art and Science from CSM, University of Arts London.
Jatun Risba
Back