My ongoing art project Minotaurs of the Mind is primarily inspired by Greek mythology, aspects of Freudian and Jungian psychoanalytic theories, and elements of Sartrean existentialist philosophy. Through it I explore different conundrums of the human condition by juxtaposing and fusing the poetics and tragedy of Classical myth with allegories of psychopathologies and philosophical ideas - some of which, once considered taboo and transgressive, have transcended and become common-place. In Minotaurs of the Mind the mind is considered an inner labyrinth via the creation of visual and conceptual analogies between convolutions of the psyche and the Cretan labyrinth. The pieces in this body of work are meticulously made and combine traditional and new technologies, techniques, and materials; their high quality finish charges them with a visceral simplicity which renders them simultaneously baroque and minimalist.

My presentation entails a discussion of the three sculptures which so far comprise Minotaurs of the Mind, and how by merging art, science and humanities, they open up scope for a transdiciplinary consideration of the notions of identity, self, and of other ontological preoccupations: Medusa offers a clinical and psychoanalytical approach to the Ancient Greek myth by presenting the Gorgon as a human brain formed of entwined serpents. This representational strategy breaks away from the idea of feminine evil and the fin-de-siècle femme fatale as the brain shape articulates evil as inherently human, regardless of gender. Cast in lead crystal glass, a medium originally employed in the Applied Arts,

Medusa is conceptually and aesthetically underscored by Freud’s equating of the fear of castration with that of decapitation. Its phallic form subverts the Freudian interpretation of Medusa’s severed head as a symbol of terrifying female genitalia.

Veins of Vanity is a contemporary take on the Vanitas genre. It is a cast of my back which shows indents and scarring that testify the destructive - yet beautiful - aspects of the body modification practise of tightlacing. Such scarring is only visible because Veins of Vanity is cast in optical glass which, due to its particularly low refractive and reflective properties, is utilised in the manufacturing of high-tech telescope lenses. Whilst candidly critical of my own vanity, the ethereal transparency of this sculpture is dehumanising and points to desires for idealised bodies, identities, and selves, as well as to the anxieties, obsessions, and other psychopathologies which underline them.

Despair complicates and blurs gender classification, which has not been specified and purposely left ambiguous. The absence of both body and face in Despair, and thus of a persona, renders it a (dis)embodiment of desperation. The simultaneous presence and absence of bodily representation viscerally communicates the plight of despair and the contingency of transcendence: the unrepresented, absent body and identity are precisely what form a liminal space charged with significatory potential: it can be seen as analogous to the Sartrean notion of ‘being and nothingness’, and thus as locus where ontological thresholds, inner and outer realities and worlds can be considered and explored. 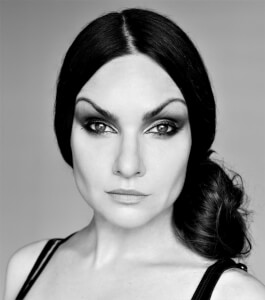 Iluá Hauck da Silva
62. Minotaurs of the Mind - Ontological Thresholds (Iluá Hauck da Silva)
Iluá Hauck da Silva is an independent visual artist. She was born in Campinas, Brazil, and has lived in London since 1997. She received her BA in Art History from Goldsmiths, University of London and her MA in Christianity & The Arts from King’s College London (in association with the National Gallery). Hauck da Silva has also studied glassmaking, both in the UK and in France. She has exhibited widely, including with the National Trust, the Royal Parks, the British Optical Association Museum, and The Royal Landscape in the UK, as well as across Europe, and in the US and Brazil. Her work is supported by the Arts Council England. The artist has been nominated for the Aesthetica Art Prize and the Winter Pride UK, and she also contributes to art publication Artlyst. Hauck da Silva’s work features in public and private collections worldwide. www.iluahauckdasilva.com
Iluá Hauck da Silva
Back