At the TTT 2018 conference in Mexico City I began to speak of my thoughts on making artwork in association with the world class science research team CANDO, (Controlling Abnormal Network Dynamics using Optogenetics), which is based in Newcastle University’s Institute of Neurology. Their investigation involves the use of gene therapy and the brain implantation of a mechanical device to control focal epilepsy. The approach and the findings could be applicable to a range of other neurological disorders, where neurons are malfunctioning.

In the Mexico session I raised issues over the science and ethical issues. I sketched out my early ideas on the art works as the project, Illuminating the Self began. I discussed how the improvements and changes that were commensurate with the medical process had considerable potential consequences and like much science would effect how we see ourselves. Significant for me in that early research period was the surprising discovery that designed into the process, was the removal after one year of the brain implanted device, the optrode. This removal would happen even if the process were successful. Why?

The integration of biological beings with non-biological parts, sensors and devices raises conceptual challenges and both legal and ethical questions. What does it mean to be a hybrid? What do these integral devices mean to us psychologically? Does such an intervention cause disruption to our sense of embodiment? Such science work transgresses the boundary between persons and things, and between subject and object. What is the legal framework for such work? Who owns the implanted device? Where does the law of property stand on such matters? Who assumes liability?

All this intrigued me. How does one make artwork about such topics? As artists should we be working in this realm at all; in this reality? Yet the art space is the place where we continue without restraint to dream of the future.

As artists we can proffer new visions, but is this reasonable when we deal with what are life and death conditions? Ethical questions arise about how we negotiate this type of space in the lab and the studio? What are the forms of art that are relevant to such discussions? Do we fall back on established aesthetics? Where do we go? This all intrigued me and was the root of much of my research and the consequent provisional drawings towards art works. Now how do these ideas play out in the works made for the final exhibition. What issues were raised, how could one measure the effectiveness of the project.

This talk will describe and investigate the art works that I produced for the final show, Illuminating the Self, shown in Newcastle, through January, February and March 2020 at the Hatton Gallery and Vane simultaneously. What were the successes and failures of the work I produced and where to next? 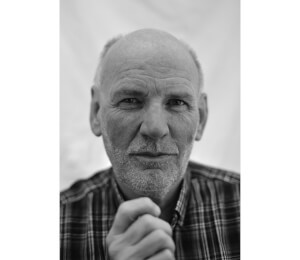 Andrew Carnie
59. Self - Illuminated (Andrew Carnie)
www.andrewcarnie.uk Andrew Carnie is an artist and academic. His artistic practice often involves a meaningful interaction with scientists regarding themes and ideas. A starting point is often recent scientific studies on the brain and neurology. His overarching concern is how we get a sense of our-selves, through science theory, ideas, and images. He works in a variety of media and scale, from watercolor to large installations. The work is most often time-based in nature, involving slide projection using dissolve systems or video projection onto complex screen configurations. In a darkened space layered images appear and disappear on suspended screens, the developing display absorbing the viewer into an expanded sense of space and time through the slowly unfolding narratives that evolve before and around them. This work has been exhibited widely from the Daejeon Museum in South Korea to Exit Art in New York.
Andrew Carnie
Back