For Stiegler our mode of being is characterized by three intertwined levels of memory: the genetic memory (phylogenetic), the memory of the central nervous system (epigenetic), and the techno-logical memory (epi-phylo-genetic). Epiphylogenesis is the folding of epigenesis and phylogenesis into one another as it happens in the technological object, and is meant to explain the emergence of the thinking individuals that we ourselves are. I will engage with the philosophy of individuation developed by Gilbert Simondon — a major influence on Stiegler’s thought — in order to unpack what is at stake in epiphylogenetic memory and to argue that it can be properly understood only in an ontogenetic framework. In other words, I will contend that the problematic of memory is uncovered only in as much as we attend to being as becoming, that is to say, in as much as we understand becoming as a pre-individual dynamic relational field that produces individual beings. The problematic of memory will appear at the thresholds between the three stages of individuation identified by Simondon, namely at the passages between physical individuation, vital individuation, and psychic individuation. In this light, epiphylogenetic memory will be framed as a process aimed towards the construction of the embodied thinking subject, but a process whose failure is inscribed at its very core in as much as to think means to doubt 'thinking' itself and the  'one' who thinks.

The discussion will be guided by (mis)reading Snowflake and Honey with respect to each other. Snowflake, the work of Boryana Rossa, Guy Ben-Ary and Oleg Mavromatti, repeatedly feeds the digital image of a snowflake, as an array of electric impulses, in a network of neurons grown in a petri dish. The patterns in the neural transmissions, that are formed as a result, represent a kind of 'memory' of the snowflake for the living neural network. The neural networks are subsequently frozen in order to 'capture' this memory — or rather in order to critically think about the possibility/ impossibility of such a 'capture.' This powerful yet playful work folds epiphylogenesis against itself prompting us to ask: for whom is the snowflake a memory? What kind of thinking individual does this memory point towards and define? And who we ourselves are with respect to this individuality?  These questions become nauseatingly intense when also considered in light of Sun Yuan’s work Honey which consists of two dead human bodies, that of an old person encapsulated in a bed of ice, only the face visible, and that of a fetus placed on the face of the old person. It is in this painful space between the frozen biological neural network and the frozen human bodies that the question of memory, the question of the melting snowflakes, will have to be asked. 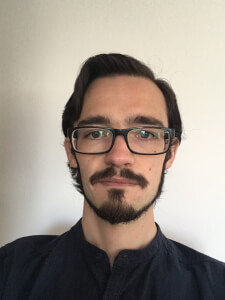 Mihai Bacaran
55. Snowflakes. The individuation of melting memories (Mihai Bacaran)
Mihai Băcăran is a PhD candidate at The University of Melbourne. He holds an MA in Art Theory from Beijing Normal University and a BA in Art History from The University of Bucharest. His PhD research looks at questions of embodiment in relation to spectatorship in net art, asking how the interaction with online works influences what our(?) bodies ‘are,’ ‘do,’ and 'mean.’
Mihai Bacaran
Back