Virtuality and reality are part of our same world but how deep is the connexion between them? Death is one of the things that sometimes make our lives feel very real. I would like to explore with you how internet and virtual realities take part in our way to deal with death.

I think about it following two axis. At first, what is an “internet homicide” and what dimension it could take through virtual reality? Many dark actions take place online, how do we manage these violent deeds on the internet and IRL? I also want to think about what haptic technologies can imply as a tool of violence. Considering that sexual aggressions already happened in VR games online, how would we deal with murder if the interaction doesn’t happen in the physical space?

Then, I want to think about mourning rituals. Hong-Kong’s company Iveneration, then fol- lowed by many others around the world, created virtual cemeteries, virtual spaces accessible from a screen for people to mourn their loved ones online. As an illustration and a start for a discussion, I want to show you the short film “Graveyard Connexion” by Jonathan Pepe, that explores what online cemeteries could be and imply in the future. What is the place of spirituality and the mystic online? Many creations in VR also imply temples or trying to recreate mystical experiences through 3D (with for example the famous VR film Ayahuasca by Jan Kounen), are VR and AR new ways to access spiritual dimensions, creating our own parallel dimensions and reality distortions? 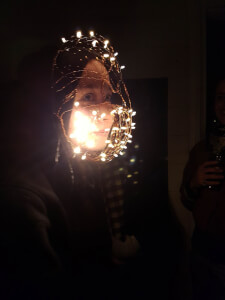