My presentation will explore how gender is transgressed in the representation of the female A.I. in Spike Jonze’s Her (2013) and Alex Garland’s Ex Machina (2015). Female nonhuman entities encountered in science fiction film have often challenged the way we understand gender, but have also perpetuated associations of the female with a threat and an object of desire. The feature of nonhumanness itself can reinforce such associations, as nonhuman characters cannot strictly be identified as subjects.

As the title implies, I will analyze how these films transgress the boundaries of gender but will also consider certain limitations to that; on the one hand, gendering the non-human contributes in understanding gender as a cultural construction, – as an artificially intelligent machine is too a construction – while, on the other, it can perpetuate certain ideas of what it means to be feminine or masculine. In that context, my paper will also investigate how a feminist reading of the films can be complicated by the very concept of gendering an A.I., which raises questions concerning the ethical dilemmas and taboos but also the efficacity of parallelizing a female human with a nonhuman.

In filmic representations of Artificial Intelligence, the definition of the term becomes extended to that of a machine displaying not only human intelligence but also human consciousness. Such representations of machines with anthropomorphic characteristics relocate the cultural anxieties and desires concerning the body, from biology to technology and challenge biological determinism.

As the examined films both engage with the failed relationship between a human being and an A.I, there is an overlapping of sci-fi with romance that implies the prospect of humans living in harmony with machines of equal if not superior intelligence. This prospect seems impossible in the present but has come to become easy to envisage in film narratives. While science fiction theorists, such as Patricia Melzer and Annette Kuhn have emphasized on how sci-fi film deviates from the real world, I will argue that it is precisely its connection to reality that can open new possibilities of discussion concerning how gender and identity are constituted. In this context, I will explore how the romance between a male human and a female A.I. works or fails – or works until it fails – as a symbolism of masculine fantasies related to the female A.I.’s embodiment or disembodiment but also fears concerning how the female machine can become a threat. 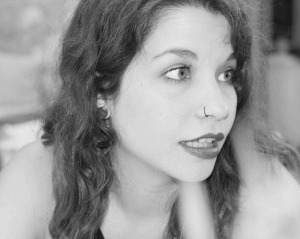 Aikaterini Papakyriakopoulou
52. The Gendered Machine in Science Fiction Film: Transgressing the Boundaries (Aikaterini Papakyriakopoulou)
Katerina Papakyriakopoulou is a PhD candidate in Film Studies at the Department of Communication and Mass Media of the National and Kapodistrian University of Athens. She obtained her Master’s in Cultural and Film Studies in 2016 (Grade 1st, scholarship awarded) and her Bachelor’s in Communication and Mass Media Studies in 2014. She also has a Piano Degree from the National Conservatory of Athens. Katerina did her internship at the Athens Digital Arts Festival as a Communications Administrator. Since 2011, she has worked as a journalist in several online media, including Avgi Newspaper Agency, while she has also volunteered in ERT Open as a radio producer. In May 2016, she participated in the 10th Audiovisual Arts Festival. In tandem with her PhD studies, she is currently working as a Project Administrator at the University of Manchester, UK. She speaks Greek, English and French.
Aikaterini Papakyriakopoulou
Back