The worldview of people living in Japan changed drastically on March 11, 2011. A massive earthquake in the northeastern region of Japan paralyzed and destroyed several towns in Tohoku District. The earthquake also resulted in a tsunami with extraordinary force, which killed people and demolished towns in a few seconds and wrought havoc on nuclear power plants in Fukushima. The tragedy did not just affect the Tohoku region; the entire country was hit, and as a result, Japanese society suffered a setback. The force of the earthquake and the subsequent tsunami was overwhelming and much stronger than that anticipated by citizens, scientists, technicians, and politicians. The force unleashed by the earthquake indicated that science & technology, which is essentially advocated by Japanese people in the modern era, cannot control nature regardless of how highly developed it is. At the same time, people in Japan became more aware that despite not being able to control nature, their activities have a great influence on the global environment, and it suffers a great transformation. As a result the global environment gives rise to the uncontrollable and huge force. And then, people come into writhe within that force.

Several Japanese artists were also deeply impacted by the earthquake and the ensuing tragedy. They attempted to express the physical changes of the land caused by the earthquake, as well as their own mental transformations in its aftermath. Soichiro Mihara is considered a representative figure of these artists. After the massive earthquake, tsunami, and destruction of nuclear power plants in Fukushima, he has been working on “[blanc] project” since 2011. This project has three parts at the present: “the blanc to overcome,” “bell,” and “cosmos.” Each part has the closed systems that are established by a variety of mediums (such as sound, foam, radiation, rainbows, microorganisms, moss, and others), various technologies and scientific knowledges. Theparticipants in these parts recognize through the systems irrational and contingent architecture innature. For example, in [blanc] project #2 “bell”, Mihara assembles the system using sound, air, sensor technologies, current scientific knowledges of environmental radiation and the historical and cultural discourse of bell, and then makes perceptible the uncertain existence of radiation in nature. Consequently, in [blanc] project Mihara realizes that the closed systems openly engage with the universe, and then poses questions on current topics, particularly on topics about technology, science, and nature at present.In this paper I reveal a significance of questions which[blanc] project poses, based on analyses of this project and interviews with Mihara. 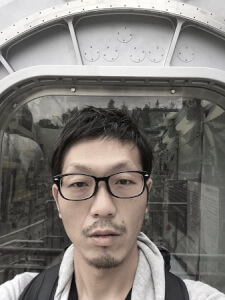 Yosaku Matsutani
51. Aesthetic Techniques Without Technology: Soichiro Mihara’s “[blanc] project” (Yosaku Matsutani)
Yosaku Matsutani is currently Associate Professor of the Faculty of Letters Department of Philosophy at Kokugakuin University, Tokyo in Japan. He specializes in aesthetic, art and media theory, and visual culture studies. He works on problems of art practices since the aesthetic turn, the relationship among science, technology and art, and the sensibilities in common among various organisms. His published works include papers on art practices in Japan since the 2010's, on a relationship between art and computation in the 21st century, on the aesthetic experience of the insect, and on image practices in outer space. His translations from the English include Rosi Braidotti’s The Posthuman (2013).
Yosaku Matsutani
Back