A taboo is commonly defined as an action that is prohibited or restricted by social or religious customs. Moreover, a taboo is a topic that is often hard to discuss, other times unmentionable, and cases where it can even be considered unthinkable. Taboos are cultural productions, embedded socially and historically, that vary from one society to another, although some taboos can be regarded as universal.

The established social norms and taboos largely govern the behavior and lives of a culture or society. Nevertheless, behaviors, societies, and in effect, taboos do not remain constant over time. Taboos are created and destructed through various processes in societies. Many might feel that currently, there are almost no taboos left, at least in Western societies, since the breaking of a taboo represents an example of social progress. However, many examples of taboos existing today can still be found.

Artists commonly attempt to bend the boundaries, challenge and confront conventions and taboos. Yet, we can still find very recent examples of artworks that have been banned, removed from exhibitions, and threatened with lawsuits. Such works dealt with religious beliefs, nudity, political correctness, sexual content, and many other topics that are contemporary taboos in many societies. Despite that, artworks have always contributed to making something previously unacceptable become acceptable through critical acclaim or sheer exposure.

Prohibition, shame, and guilt lead to silence that is used in societies to maintain taboos. But how can one study taboos, their creation, maintenance, and destruction, if absolute silence is imposed on them? Exploring taboos is only possible when this silence is broken. The breaking of silence is observable and socially more significant as it indicates an ongoing related social process for creating, maintaining, or destructing a taboo. The work presented in this paper adopts the importance of the breaking of silence on taboo topics, and thus its title Breaking the Silence.

Breaking the Silence uses machine learning methods to understand what are the contemporary taboo topics. Initially, news articles that contain the word taboo are mined from various online sources. These articles include overt references to contemporary taboo topics in today’s press as well as the report of transgressions. Natural Language Processing (NLP) methods are then used to identify the main topic of each mined article and thus group them into sets according to similarity and relevance. Next, techniques for information extraction are used to determine the most meaningful elements of the articles’ text like entities, abstract concepts, etc. Finally, new documents are generated with the utilization of automatic text summarization techniques. These generated documents summarize the main ideas and opinions for each identified taboo topic.

Breaking the Silence aims to highlight and bring to focus what topics are currently discussed as taboos. The generated summarizations underline the different topics discussed at different times and additionally the arguments for the creation, maintenance, or destruction of a taboo. 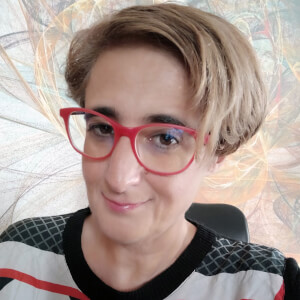 Amalia Foka
43. Breaking the Silence: Machine Learning Identified Taboos (Amalia Foka)
Amalia Foka (b. Greece) is a Creative Artificial Intelligence Researcher and educator who explores the intersection of computer science and art. Her work makes use of different artificial intelligence technologies and social media data to generate and study art. She is currently an Assistant Professor in Computer Science: Multimedia Applications for the Arts at the Department of Fine Arts & Art Sciences, School of Fine Arts, University of Ioannina, Greece, where she teaches courses on creative coding, creative interactive systems, and generative AI art. She holds a BEng in Computer Systems Engineering (1998) and an MSc in Advanced Control (1999) from the University of Manchester Institute of Science & Technology (UMIST) in the United Kingdom. She also holds a Ph.D. in Robotics (2005) from the Department of Computer Science of the University of Crete, Greece. She lives and works in Greece.
Amalia Foka
Back