32. The Simulated Real: Aesthetics and the Semblance of the Real in Terroristic Gameplay
Session: Session "NSP9 / Channel"
Speakers: Salvador Miranda

“The Simulated Real: Aesthetics and the Semblance of the Real in Terroristic Gameplay” explores the recreation of terrorism and terrorist role-playing in gaming in a post 9/11 context. Drawing examples from contemporary games like Grand Theft Auto, Call of Duty, ARMA 3: Takistan, Insurgency: Sandstorm, and SQUAD, games provide for surprisingly subjective explorations of terrorist role-playing and image-making. What does it mean to recreate these images of terrorism, so closely associated with propaganda from the War on Terror? While a previously published online version focused on identity and roleplaying (https://thehmm.nl/the-simulated-real/), this paper looks at the phenomenon through the Lacanian notion of the Real; that which cannot be reduced to the symbolic or semiotic. In particular, it looks at the aesthetic appeal of terroristic images and how these lead to their recreation. The paper suggests that the virtual world of gaming provides a risk-free space to explore the taboo of terrorism while participating in the recreation of aesthetic media tropes. It further explores the idea of terrorism as the return of the Lacanian real and how terrorist gameplay can be understood as the re-enactment of the semblance of the real. role-playing of terrorism in gaming culture. This exploration is on aesthetics is framed by how the experience of an online reality can affect our perception of our concrete world, and the inherent tension between the accepted (hyper)reality of gaming and the taboo of terrorism. This paper draws from the author’s research, as well as his work as an artist including the short film Aim Down Sights (2018). 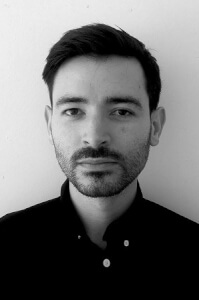 Salvador Miranda
32. The Simulated Real: Aesthetics and the Semblance of the Real in Terroristic Gameplay (Salvador Miranda)
Salvador Miranda is an artist and filmmaker based in Rotterdam. His work explores grand narratives and the images of our visual culture that (re)produce them. His works have been shown in IFFR (Rotterdam), Ruhrtriennale (Bochum) EYE Filmmuseum (Amsterdam), TENT (Rotterdam) Haiton Art Center (Taipei), among others. Salvador holds a Masters from the Piet Zwart Institute in the Netherlands.
Salvador Miranda
Back