Some years ago, I began refusing to eat meat entirely. My objection being based neither on ecological nor ethical grounds, I could only guess at what mechanism of a personal eschatology drove my alimentary choice. The nucleus of Spinebone Soup and Stuffed Rabbits is a reflection on the nature of food politics; the transition of biopolitics into necropolitics; the establishment of ethics as a product of dominant ideologies; and the role of trauma, memory, and speech in the shaping of consumer choice. The Siege of Leningrad served as a point of departure. For me, it is not some speculative episode out of an abstract past, but a humanitarian collapse which directly animated my anamnesis. It is a unique, timeless space behind the looking glass, ever-present, casting a shadow across generations. The Siege is an indelible genetic memory, a trauma, a corporeal imprint. It is revealed in sophisticated figures of omission, in the failure to utter, in postures of violence. The food trauma is not only the remembrance of hunger; it is the horror of extreme survival. Forced cannibalism drives destructive memory and legitimises dehumanisation by the power apparatus. Heroic status is bestowed upon those who, deprived of words, are thereafter eaten. The multiple languages of my work conflate different ideologies. References to the archival representation of plenitude neighbor the familiar tropes of consumerism. The nourishing component of this general approach is reduced to a representation of a shell, a symbol, a signified without a signifier: to a speculative cookbook of words.

For the conference, I am preparing an artist talk where I want to raise questions of taboos, ideologies and identities, as well as their interconnections. I will present my artistic work comprising excerpts from the video-works, together with the artist-book. My talk will be based on the text of monograph Food as structural unit of politics, transmitter of memory, and matter of art (2018). 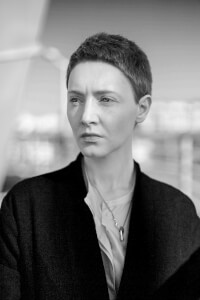 Ksenia Yurkova
29. Liminalities of incorporation (Ksenia Yurkova)
Ksenia Yurkova (1984) is an artist, curator, and researcher, living between Russia and Austria. She considers her leading artistic media to be text, photography, video, and installation. Yurkova started her practice as a researcher in the field of political theory and communication theory. The main focus of her interest for a long time was communication and language: the varieties of its substance, the possibility of conversion, its mythological aspect, stereotyping (the question of personal and political self-identification and identification by others), problems of memory, attitudes, and reliance. Lately, the artist is researching the phenomenon of affect in its autonomous bodily emanation; in its personal and political registers. She focuses upon how a stage of individual perception, to which one can relate memory, traumatic recollection, and problems of identity construction, transforms itself into affects of the political body. Coming a long way from political and cultural journalism, through organising and curating cultural and art events, Ksenia settled in individual artistic and research practice, which allows the useful critical distance for observation and working with contemporary issues. Her approach is based on methods of language appropriation, over-affirmation, self-reflection, and self-criticism through ironic component inevitably added to the most pressing matters. Nonetheless, Ksenia didn’t give up socially engaged practice and launched a festival-laboratory Suoja/ Shelter in Helsinki, which already the 3rd year touches upon sensitive problematics of society. Ksenia Yurkova has taken part in numerous shows and festivals worldwide, has released several artist books. Her works are in private collections in Russia, Germany, France, Finland, and Austria.
Ksenia Yurkova
Back