The paper studies mimesis as a biological and artistic phenomenon. Refers to codes hidden inside artworks, as the technique of hiding human code inside an insect at the The Melanitis leda Project which was about a transgenic model of the Leda Melanitis butterfly using one of Yiannis Melanitis genes (optix gene 6). An example of hidden coding is the encryption of the word BACH within the structure of the fugue by the composer himself in his latest work (Art of the Fugue / Die Kunst Der Fuge). The third theme of the unfinished quadruple fugue begins with the sequence of “BACH” notes.

Artists’ Name as a Camouflage Tool is apparent in Odyssey also. Outis is a fake, self-invented name given to Polyphemus for deceiving him by its double meaning. In front of Cyclops, Odysseus names himself Οὖτις, usually translated as Nobody or as Noman. Odysseus is also the model of a modern man that Ezra Pound sees himself entangled to while writing the Cantos, after his imprisonment in a cage in post-war Italy. The code of Outis means more than the meaning of the word. His codified camouflage makes him stand “ out of time  ̈; quite the same for a biological code that dynamically contains information of a body-it serves as encryption in time. An example is head codification in animals : Genomic sequences may express body parts; a code corresponds to a body encrypted in a text, as in the Lhx1 genomic sequence 11. If this sequence is removed during embryogenesis in the Lim1 gene, the head of the organism does not grow.

We further examine how mimesis turns comical. The process of disappearing in art or nature requires the pre-assumption of a mimesis, a satiric act of deceiving, trick, including an ultimate laughingstock (Greek =περίγελως). Being a fool may save the life of the ridiculer. We may define the act of mimesis by means of information’ s distribution in nature. Ιn my recent works Ι ́m attracted by the Caligo Eurilochus and Caligo Memnon owl butterflies, genus Caligo. Caligo butterflies mimic the image of an owl (by texture and an eye pattern) and at the same time a snake, at each wing end. So, do butterflies have consciousness of the pattern perplexity? Every case of “ridiculing” a respectable model in nature requires an audience. Butterflies “know” the existence of external monitoring. If butterflies are artists, the artists’ lab as a garden, where butterflies find their own camouflage points and in my case, return to the dead artists’ body.

The performance If You Cannot Be An Owl, Masquerade Like A Butterfly occurred on the Isola di San Michele: Cemetery, Venice, around the graves of dead poets. An artist never dies, she/he encrypts the work inside nature, or even incorporates it in its mechanisms. 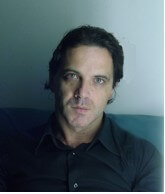 Ioannis Melanitis
28. Hiding Art, Hiding Codes and the Comic Strategies of Total Disappearing (Ioannis Melanitis)
Y. Melanitis’s work initiates from a conceptualization on the strategies of contemporary art. Recent research focuses on the role of information on the arts considering “INFORMATION AS THE NEW CONCEPTUALIZATION. (Latest example is his gene micro-injected into the butterfly named Leda Melanitis for the creation of a transgenic, adult butterfly breed). Yiannis Melanitis holds degrees in painting, sculpture and digital arts from the Athens School of Fine Arts and is presently a PhD candidate at the School of Architecture, (NTUA) with a thesis entitled: Biological Dynamics in Art. Exhibited in Austria, Mexico, Brasil, Belgium, UK, Portugal, Switzerland, US, Scotland, Italy, Portugal, Sweden, Germany, Greece. Latest work presentations include Ars Electronica 2020, MACRO Museum (Rome); at the National Museum of Brasil; Biblioteque of Brasil; Museu D. Diogo de Sousa, Braga, Portugal; the Tongeren Museum and Praetorium, Belgium. As a subject of criticism, his work is included in international editions as "Art Tomorrow" (Ed.L.Smith), Leonardo MIT, Lomonosov Moscow University, by Seung-Chol Shin, Assimi Kaniari, Mario Savini among others.
Ioannis Melanitis
Back