I have argued an epistemologically unbound or ‘subtractive’ posthumanismcannot constrain or represent its real but must think from it as a result of its subtraction of any transcendental envelope for posthuman possibility (agency,subjectivity, etc.). However, the real of posthumanism is not directly thinkable for different reasons than the Laruellian real, which is axiomatically posited as such. The real of Unbound Posthumanism is temporally futural, the expression of modernist historical change and contingency, and must be constructed to become available to cognition. Thus, by a curious reversal, posthumanism submits to this real by generating it.

This provides an essential link between the epistemological thematic of unbinding, common to posthumanism and certain neo-rationalist and realist philosophies, and a conception of posthuman eros as the cultivation and exploration of biomorphic bodies and xenophilic desires.

existed. Posthumanism is thus inextricably linked to a conception of the body as an alterable, open site for exploration of pleasure, pain, mutilation and enhancement, mutation or death. The ‘thirst for annihilation’ is consequently built into posthumanism as an operation on subjectivity defined by its erasure of envelopes or prior constraints on subjectivity.

Are fantasies of physical extirpation through radical posthuman alteration and death formally equivalent? If not, what does the fatal component add to the subtractive operation? I will argue that, in contrast to the thought of subtraction, death operates at both a notional and affective level to sensitize us to an impersonal time and space that intersects with the body while being phenomenologically inaccessible to it. Death thus introduces an abstract and yet ‘irreflexive’ dimension into the affective phenomenology of erotic experience which accentuates both the body and its extroversion into ramifying technical and ecological differences that exceed all finite physical envelopes. It consequentially eroticizes both the practical and theoretical elimination of the human subject. 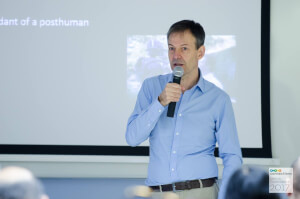 David Roden
25. Erotic Subtraction and Death (David Roden)
David Roden’s published work has addressed the relationship between deconstruction and analytic philosophy, philosophical naturalism, the metaphysics of sound and posthumanism. His book Posthuman Life: Philosophy at the Edge of the Human (New York, 2014) explores the ethical and epistemological ramifications of Speculative Posthumanism: the thesis that there could be agents originating in human social-technical systems that become posthuman as a result of some technological alteration of their powers. His current work considers posthumanist theories of agency and their implications for aesthetics and philosophical method. He teaches at the Open University, UK.
David Roden
Back