If we read the audio signal as a sign and thus a signifier – signified construction as, we start scrutinizing aural simulacra. Postmodernist thinkers and scholars have elaborated extensively on the fact that reality seems to have started being preceded by things that are not real. While this idea has been explored within the world of the tangible and of appearances, such an analysis has been overlooked regarding the immaterial realm of the aural. Specifically Inspired by what Jean Baudrillard defines as the ‘orders of appearances’, we explore an analogy and introduce ‘the orders of the heard’. These are signals of the sacramental order, the order of maleficence, the order of sorcery and that of pure aural simulacra.

During this endeavor, we now stumble upon the order of sorcery, which refers to good copies of profound realities without originals. Which signals are of the order of sorcery? Such signals should not be captured, copied or reproduced. They should be conjured just like golems, creations of the sound artist, designed and produced to serve his purposes. We think that there is a possibility that quite a few could fall into what Masahiro Mori defined as ‘the uncanny valley’. But Is there an acoustic uncanny valley? If the answer is affirmative, we need to identify the point at which the audio signal falls into it.

In order to recognize, appreciate and to analyze the ramifications such signals may have on the audience as well as on one’s artistic practice, we need to proceed with application. With this article, through practice and research, while journeying through the immaterial realm of acoustic hyperreality we introduce the signals of ‘the order of sorcery’ of ‘the orders of the heard’ and their place within auditory arts and research. 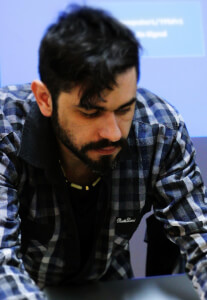 Luc Messinezis
24. Orders of the Heard. The Order of Sorcery (Luc Messinezis, Apostolos Loufopoulos)
Luc Messinezis is an artist and researcher working across sound, installation and performance. He holds an MA in sound arts awarded by the University of the Arts London and his practice oscillates between aural awareness, anthropology, notions of reality and authenticity. Luc usually aims to mediumizing the audience by placing them at the epicentre of the work and thus fusing gesture, aesthetics and message into an enhanced reality. Notable presentations of his work include Ars Electronica 2020 (Linz, Austria), minus20degree Festival 2020 (Flachau, Austria), Primarolia Festival 2019 (Egio, Greece), ADAF 2015 (Athens, Greece) and Ethnographic Terminalia 2011 (Montreal Canada) among others. Luc was nominated for the ScreenGrab7 Media Award in 2015 (Townsville, Australia) for his work ‘The Modern book of Cynics’ while as an academic researcher he has presented his work in a multitude of international conferences, authored several publications and currently scrutinizes ‘aural simulacra’ as a PhD Candidate.
Luc Messinezis 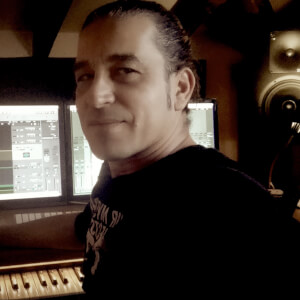 Apostolos Loufopoulos
24. Orders of the Heard. The Order of Sorcery (Luc Messinezis, Apostolos Loufopoulos)
Apostolos Loufopoulos, composer, sound designer, Associate Professor at the Ionian University, Department of Audio & Visual Arts, studied at the Ionian University, Greece and at City University, London. His work is mainly focused on nature and sound, but also on the inter-contextual approach to music and the convergence of musical genres and arts. His creations have been presented internationally in renown festivals and conferences, and received a number of awards at international competitions such as Αrs Electronica (Austria), Bourges (France), Noroit (France), Metamorphoses (Belgium), Space of Sound (Belgium), Franco Evangelisti (Italy), Musica Nova (Czech Republic), SCRIME (France), I. Xenakis (Greece), D. Dragatakis (Greece). Discography includes collections by INA-GRM, Musiques & Recherches, Ionian University, CyberArts, Touch Records and a personal release. His scores have been published by S. Zerboni (Milano) and Just Flutes (London). He is a founding member of HELMCA and the Greek Society for Acoustic Ecology. https://ionio.academia.edu/ApostolosLoufopoulos https://soundcloud.com/apostolosloufopoulos/sets https://www.youtube.com/user/apostolosloufopoulos
Apostolos Loufopoulos
Back