Nietzsche, Beyond good and Evil 1886

In the words of the ancient Chinese proverb, May you live in interesting times! — and it would appear that we do — a time in which centuries of accumulative environmental degradation forms a confluence with the exponential growth in human population and resource consumption, driven by what may be considered to be the end-game of global capital.

As Nietzsche suggests — and when you gaze long into an abyss the abyss also gazes into thee.

This paper examines of socio-political forces as they effect the complex balance of global environmental systems and the consequent macro scale counter-reactions in biological, ecological and climatic spheres. This theme will be achieved not by a conventional statistical analysis but through metaphor —. by the examination of the two of the Authors creative works Silent Forest (1996)

These two projects whilst differing radically in their methodology and physical structure both critique the accelerating drive towards a planetary ecocide (or omnicide) a project that has been unfolding for several centuries and which operates across multiple vectors, which however all contribute to interdependent environmental instability.

Silent Forest comes from a series of works that consider historical, ideological and ecological sites of silence and/or silencing. The work addresses the negative spaces generated by political and cultural forces, in the belief that it is these inarticulate voids, in the shadows and empty spaces that we are able to glimpse the massive contradictions of our economic and aesthetic realities.

Silent Forest proposes that we listen to a cluster of silences decreed by political and military power and as such, is itself, constructed as a tracing of colonial and neo-colonial relationships linking cultural form with political force. This 1996 installation, together with its accompanying radio broadcast, weave a sonic web between a natural environment under chemical siege and the High culture of Western Opera, here exemplified by the French built Hanoi Opera House. The massive deployment of dioxin defoliants in Vietnam to create an Ecological silence is metaphorically linked to the prime function of the Hanoi Opera, employed as both a sign and transmitter of the colonial process and charged with the task of extinguishing the traditional with the Imperial —a juxtaposing multiple silences and loss. The project is sourced within the specific historical and geographic locales of the Vietnamese forest, a forest unwittingly at war — reduced to silence by chemical defoliants. This act of muting resonates against the cultural silencing which is implicit in colonialism, specifically embodied here by the imported culture of European Opera employed to overlay and obscure traditional expression. Silence plays on ironically, in the muting of the Divas themselves since they departed Hanoi in 1954, to be replaced by the cacophony of the air-raid siren — itself now redundant, bowing out to the raucous cries of the hawkers announcing the new-world economic order.

Supereste ut Pugnatis (Fight to Live) was the motto of the British Chemical Defence Establishment, established at Porton Down in 1940. Which has been appropriated as the title of a work that examines the intersection between the Visual Arts and the Bio-Sciences and focusses upon the development of metaphors that address the concept of the membrane in biology, politics and culture.

We are defined, structured and bounded by membranes, selective barriers that function at a molecular level within our bodies and operate at the macro scale as socio-political boundaries. Membranes are selectively permeable structures, controlling the exchange of ions in our synapses, transforming photons into carbohydrates in plants, the meniscus of the world ocean, trading gasses with the atmosphere and regulating our climate.

Manifest as an architecture of power the membrane is the portcullis and drawbridge regulating access to a Norman Castle. A filter of economic privilege to the VIP lounge and the algorithm that structures the flow of surveillance information at airport security. It is the tissue of language describing the legal pressure valve that transported the poor and disaffected to Australia in a risible attempt to rid England of its criminal class, and the tongue twisters that policed the White Australia policy.

Supereste ut Pugnatis (Pugnatis) ut Supereste drifts in these interstitial spaces between biology, politics, culture and history constantly recalling the functional significance of the membrane as border, as a cultural and linguistic filter, as a generator of difference.

Whilst Silent Forest proposes a deep and attentive listening to the abyss of environmental and political silence — Supereste ut Pugnatis (Pugnatis) ut Supereste requires that we critically listen to the double-speak of border control, and the biology of ethnicity as a tool of exclusion. 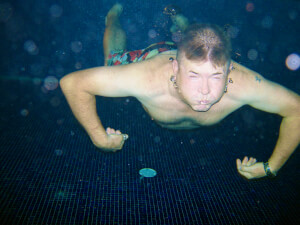 Nigel Helyer
21. Tracing Silence; Ecocide and Omnicide (Nigel Helyer)
22. Co-composition and De-composition (Nigel Helyer)
Dr Nigel Helyer (aka DrSonique) is a contemporary polymath whose work links Art and Science, or more accurately Poesis and Techne in a strong embrace of the environment, identity and cultural history. He has an international reputation as a sculptor and sound-artist who creates large scale sound-sculptures, environmental artworks and inter-active bio-art projects that prompt the community to engage with their cultural histories, identity and sense of place. His works are an open invitation to examine the abstract conditions of our world and our complex relationships to it. Helyer web-archive — http://www.sonicobjects.com
Nigel Helyer
Back