18. Biodemonological re-enchantments – or how to contaminate through intimate stories of commons without consensus
Session: Session "ORF10 / Crack"
Speakers: Agnieszka Wolodzko

In the present paper, I will discuss how to practice relations of contaminations that condition our shared more than human bodies. Through weaving the intimate stories of encounter, possibilities of shared but not unified forms of resistance against powers of identification between life, art, science and philosophy will hopefully emerge.

In the time of exhaustion of narratives and means of telling stories, there is undeniably a new need of telling stories despite capture - stories that would escape control and commodification, that would induce change, reenchant and give caring conditions for multiple human and nonhuman bodies.(1) It is thus not about fetishization of an individual who tells, who reassures the value and importance of the subject. Rather, it is about stories that, as Stengers argues, call for the transformation of an individual story based on given norms and ideas into demonological because collective dynamic and experimental imaginings.(2) But how to think with demonological relations of transformations together without the constrains of morals and given models that tend to govern and exclude what disagrees? In the present paper, I will thus focus on a particular re-enchantment, and I will weave the stories of vegetariat – the contemporary matters of resistance through the plants’ resilience inspired by and becoming with the work of Špela Petrič.

The acceleration and commodification of our experiences and bodies by the surveillance (bio)capitalism,(3) caused a sense of storytelling to be enacted as a resource for behavioural prediction. Unlike, however, Zuboff, for whom in the face of a total commodification and privatization of life, only the old humanistic masters of will and agency can save us, the logic of vegetariat declares commons as ways of care and resilience in the shape of a nonperson multiple. The question is thus not how to imagine different agencies telling stories, or how to capture them, but how to live and raise within their mutating stories. How to condition multiple agencies and their risky contaminations in order to care before them while creating new stories? The resistance begins with the acknowledging that we are already vegetariat - multiplicity of commons that thrive on contamination.

What I understand by contamination, rather than being in opposition to the idea of purity, similarly as Anna Tsing(4) and Alexis Shotwell,(5) I use as an ontological status quo, where tension and change is not just inscribed into the nature of our living human and non-human bodies, but welcomed. Through generating and bringing multiplicity of risky encounters this paper will enact the experiment of how the contaminating relationality of asymmetric dependence, conditions the very movement of the resistance that becomes the ethics within commons without consensus. In other words, how to care and become responsible before the multiple that might kill us, exhaust us and multiply us?

(1) Silvia Federici and Peter Linebaugh, Re-Enchanting the World: Feminism and the Politics of the Commons (Oakland, California: PM Press, 2018).

(3) Shoshana Zuboff, The Age of Surveillance Capitalism: The Fight for a Human Future at the New Frontier of Power, (New York: PublicAffairs, 2019).

(4) Anna Lowenhaupt Tsing, The Mushroom at the End of the World: On the Possibility of Life in Capitalist Ruins (Princeton: Princeton University Press, 2015). 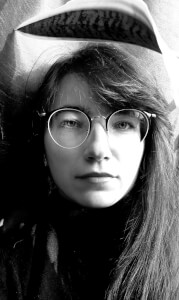 Agnieszka Wolodzko
18. Biodemonological re-enchantments – or how to contaminate through intimate stories of commons without consensus (Agnieszka Wolodzko)
Dr. Agnieszka Anna Wołodźko is a lecturer and researcher at AKI Academy of Art and Design, ArtEZ where she established and coordinates BIOMATTERs, an artistic research program that explores how to work with living matters. Her research focuses on affect theory, posthumanism and intersection between art, ethics and biotechnology. She is an artistic and a public curator of exhibitions and events on art working with living matters and art and science relations. Her recent relevant publications are: "Forgotten Rituals of Yearning," Capacious: Journal for Emerging Affect Inquiry; “Materiality of affect. How art can reveal the more subtle realities of an encounter,” in This Deleuzian Century: Art, Activism, Life (eds.) Rosi Braidotti and Rick Dolphijn; currently working on her book “Bodies within Affect. Practicing Contaminating Matters through Bioart.”
Agnieszka Wolodzko
Back