177. One must have a bone, not be afraid to show the bone, and to lose the meat in the process
Session: Session "ORF3a / Medulla"
Speakers: Alejandro Chellet

This title is inspired on poem by Antonin Artaud, The pursuit of fecality (1946). Also the title of the main performance from the series of which i would be referring in this artist talk.

I believe all living beings are constituted from the same elements: earth, rocks, air, water and soil. Under this premise I created not just functional permaculture projects but also artworks that looked at making people understand that we are all one with the universe and this planet. While practicing organic and regenerative agriculture with various biofertilizer fabrication methods improving soil quality and helping degraded soils, I came to understand that the soil is a living organism that becomes part of ourselves. By feeding our bodies with its nutrients, and turning them accessible to us (after been synthetized by other living organisms) we ultimately are eating soil. As an example following this logic, I have learnt the about the nutrient cycle (including humans) and how society is designed to have a nutrient capital loss. An opposite example is saving nutrients like with the technologies of: dry, composting or bio-digesting toilets.

This artist talk reflects on a season of creating permaculture and live art / life experiences during 2014 in between the Hudson Valley, NYC and Sao Paulo. During this research I was working mostly with improvisation, finding objects and in public space and in particular working with the element; bone ashes that were obtained with a method to improve health soil (and therefore people health) getting calcium and potassium from reusing bones waste from the meat industry. This series focused in expressing my own views and concerns about a physical and political body and embracing a biological body as a living organism with a soul but well embedded in current human lifetime state of narco, pandemic and agricultural terrorism led by the chemical and pharmaceutical corporations attempting against our global soils health from which all of ours lives depend upon. I created the Hazmat suit shaman aiming to evoque criticism about viruses like EBOLA back in 2014 (or today as we experience it with SARS-CoV-2) and questioned its existence as a biological death weapons that could spread all around the world.

Was this created under interests by certain nations or corporations to gain power over highly precious land and natural resources?

Through making this performative shamanic DIYbio agricultural fertilizing rituals I asked myself if diseases like this viruses, as well as the agrochemical fertilizers and agro toxic pesticides were related tools using bio-technology in a very carefully targeted way to take people's entire power away from them. This still remains unclear to me. I foresee this disasters; contamination, intoxication, erosion, droughts and desertification as attempts from chemical companies to turn land inhospitable, arid and sterile creating unhealthy humans in need of pharmaceutical medicines. I questioned if this intends to eliminate the vulnerable and indigenous communities who are holding safe this natural resources and their culture (included all the ancient knowledge residing in their culture kept mostly by the natural healers). 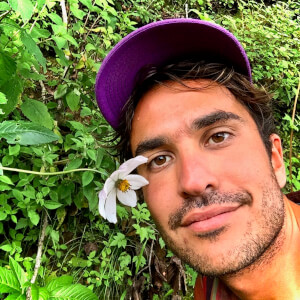 Alejandro Chellet
177. One must have a bone, not be afraid to show the bone, and to lose the meat in the process (Alejandro Chellet)
Alejandro Chellet is a Mexican multidisciplinary artist, curator and permaculture designer. His art addresses the misplaced core principles of coexistence, the loss of connection with Nature and the political and environmental context of urban societies. From social practice to site specific, urban interventions and performances he is using permaculture, artivism, improvisation, somatic movement, politics, altruism and shamanism. His art has been shown at festivals, museums and galleries in Europe, Asia, North, Central and South America. In 2014 Alejandro started co-designing together with Grace Exhibition space an ongoing art and permaculture summer residency program in Rosendale, NY. In 2015 he ventured into opening Casa Viva Gallery, an artist-run space for contemporary art in Mexico City with five years of programming. Lastly in February 2020 he launched a broader art residency program at the community space Huerto Roma Verde in Mexico City, his current Art-Life base after the pandemic breakout.
Alejandro Chellet
Back