Contemporary western societies seem to be caught in the pincers between a reified public realm allowing only for heteronomous thoughts and feelings and a privatism generated by a mass communication and its imaginary fixations, that is, by an increasing foreclosure of the symbolic order closing itself off from any interpretative approaches and models of transmission and reception that could still carry with them an unconscious or a mode of memory reaching beyond the here and now. The ever-accelerating consumption of contemporary western societies’ mass- communicative import thwarts any recourse to traditional ideologico-critical schemata and attests to the arrival of a new regime of historicity in which mass communication replaces action and generates instead an artificial product defined as image, spectacle, and simulacrum – an artificial product that, in order to be assumed, needs however an excessive reality.

In other words, contemporary western societies present a world of universalized simulacra that can no longer be distinguished from reality and that dissolves the real into imaginary simulations, thereby making the symbolic-public realm of appearance and efficacy disappear behind the omnipresence of the imaginary. This world of self-enclosing simulacra reveals itself as world in which the antagonisms of the symbolic order are no longer simply repressed or disavowed, but rather foreclosed, while generating at the same time dark phenomena that must be grasped as returns in the real.

This irruption of “psychotic realism” (Mario Perniola) can be observed within the realm of contemporary artistic and aesthetic sensibility, that is, in artistic attempts to expose raw and violent events without any recourse to symbolic agencies of mediation and to produce transgressive events that are to provoke experiences of disgust, repulsion, or disturbance that leave behind the ideal of disinterested aesthetic contemplation. Psychotic realism claims not only the possibility of a complete collapse of all structures of mediation between art and the real, but it also entails a type of art acquiring a physical presence and materiality in a direct manner, while aesthetic experience is dissolved into the surface of the external world. Psychotic realism in art and aesthetics might not only constitute the endpoint of 20th century vitalism but also the failure to think and sense (minimal) difference and sublimation. In other words, its products of abjection and trash might be nothing but mere “inherent transgressions” (Slavoj Žižek) within the late- capitalist frame of the contemporary artworld that indirectly confirm (transcendent) identity and positivity. 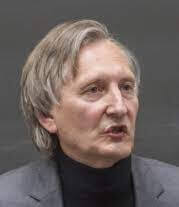 Erik Vogt
17. Toward a Critique of Psychotic Realism in Art (Erik Vogt)
Erik Vogt is Gwendolyn Miles Smith Professor of Philosophy at Trinity College (CT, USA), as well as Dozent of Philosophy at the University of Vienna (Vienna, Austria). He is the author and (co-)editor of 23 books, and author of 70 articles. His main areas of publication are German, French, Italian aesthetic theory and political thought. Recent book publications include Adorno and the Concept of Genocide (2016); Bruchlinien Europas (2016) Zwischen Sensologie und aesthetischem Dissens (2019); Jacques Rancière und die Literatur (2020). He currently works on a text about Peter Handke, as well as on a volume about the work of Slavoj Žižek.
Erik Vogt
Back