Memetic niche construction. The age of mass disinformation requires a whole new survival strategy. A world of containment, management on an enormous scale, and protocols for tabulation left and right.

My concern is what acts an artist, a scientist, a philosopher or any other citizen can engage in - that is how to be in the world. Speculative ontologies allow us to look at the mechanisms of place-making that exist and inquire how they can become more accomodating. Scientific knowledge committed to unearthing principles that stagnant institutions fail to see and artistic analysis that produce imaginative expression within a deep contemplation of our predicament.

The history of my projects at XOX Labs make gestures towards finding paths from art and science that offer contextual sustainability. Starting from medical research, philosophy and a new media writing and art practice, between open science and experimental humanities, I've developed a framework that has discovered and reflected on practices through a host of disciplines.

My paper will focus on the philosophies and action of communities both popular and specialized, from new media, biological and scientific arts to scientists engaging closely with new cultural forms, educational languages and inscription methodologies. The thinker is a science fictional speculator, technological acceleration behooves an industrial mindset and this creates a corporate challenge for the working scientist. Art's more nebulous and luxury-oriented institutions boast clandestine idea sets where they lack public pragmatics, offering a strategic incubation platform over the public fandom of their popular equivalents. In each case we realize that the political exigency of global health, environmental change and sociopolitical exclusion all stagnate without a tactical and mobilized front that is able to shapeshift and re-oriented in response to an environment at once fragmenting and militarized, globally connective in a way that upends local culture and reinvents futures.

I will engage in a Spinozan perspective in framing these issues - in Book 3 of the Ethics he states:

"...I have just pointed out that the objectors cannot fix the limits of the body's power, or say what can be concluded from a consideration of its sole nature, whereas they have experience of many things being accomplished solely by the laws of nature, which they would never have believed possible except under the direction of mind : such are the actions performed by somnambulists while asleep, and wondered at by their performers when awake. I would further call attention to the mechanism of the human body, which far surpasses in complexity all that has been put together by human art, not to repeat what I have already shown, namely, that from nature, under whatever attribute she be considered, infinite results follow." - Ethics, Book 3

Epistemological materialism as an ethical position (the emotions are a reminder of our pre- mental materiality). This is the epitome of the scientific ecological position - that there are  material circumstances to be discovered that we must humbly commit to if we have to have good knowledge. 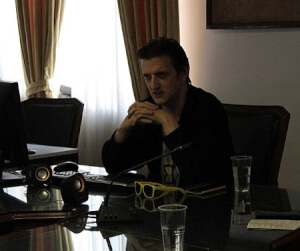 Erik Zepka
164. The Ethics of Epistemological Materialism (Erik Zepka)
Erik Hoff Zepka (erik rzepka, ek rzepka, xoxoxcom, xoxox, Xenia Common) is a conceptual media artist, curator, poet, scientist, educator and theorist who critically explores the practice and consequences of science and technology. His art engages with the cultural products of technoscience and rethinks them in terms of exhibition and display. The work has been showcased at HUMlab, ISEA (Scotland and Canada), Nabi Museum, The Tate Modern, Coaxial Arts (LA), Bronx ArtSpace, The Western Front, Pikselfest, SPAMM Cupcake (Paris/New York), The Whitney Museum, Videographe, and Interactive Futures. He's collaborated with groups including The Avatar Orchestra Metaverse, R3//1X//0RX in addition to artists such as Pauline Oliveiros and Stelarc. Website: http://xoxlabs.com/
Erik Zepka
Back