Typographers are able to solve a problem to organise digital text on differing screen sizes and resolutions by responsive and adaptive layout. Although in these layout they count with a degree of flexibility and user interaction but mainly based on a grid pattern based on the aesthetic of object oriented design. The layout is often visual representation which fits to each shape of media interface presentation. But the relation, of author of text work and its layout – program – interactive recipient - media environment, in which is the complex of digital text produced could be grasped by post humanistic approach of each position in the relation of human/machine.

Espen Aarseth (1997), in his concept of cybertext distinguishes the traversal function of a digital text, in which was described relation of text material with cyborg-author and cyborg-user. Also Philippe Bootz in the procedural model of communication described human (author and reader) and machine relation in which is developing a text of programmed e-lit work. The work is embodied in the certain space of digital environment, defines by parameters of authors concept. Katherine Hayles (1999) pointed that in the posthumanistic mind, the representation of work is formatted by dialectics of semiotic square involve in the presence/absence and pattern/randomness. According to Donna In the Haraway (1985) “cyborg space” and Lev Manovich`s (2001) “digital modularity” - the entities of conglomeration of parts could be combined with a new elements and put together again in the different way. While Manovich writes about data and algorithm relation, in Haraway posthumanistic view is possible recognise e-lit work such an embodiment of authors work concept, placed in the cyber space and based on human-author and reader/machine relation.

In the transient phase of procedural model of communication is a representation of e-lit work put in the dialectic of presence/absence and of pattern/randomness. Current text layouts based on transition from grid to rhizome are increasingly recognised as a model of transforming a finality of programmed and designed system into a processuality of an evolving, developing systems of re/programming: re/organisation of preliminary arrangements, which is caused by a ‘swerve’. (Brassett, 2017). It means it is possible to organise a new digital layout of work around the opportunities afforded by new techniques of writing in the digital and postdigital space co-designed  by both human authors and machine - artificial intelligence and user changing our understanding of designer/designing process in relation to the posthuman self-organising systems. 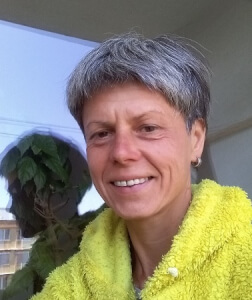 Andrea Gogova
155. Cyborg – author (Andrea Gogova)
Andrea Gogová is currently a PhD. candidate of Multimedia and Design at FMK Tomas Bata University in Zlin, Czech rep. She was born in Martin, Slovakia. Andrea Gogova was educated at Academy of Fine Arts and Design, Bratislava Slovakia and graduated both a master’s degree in design and bachelor’s degree in Visual Communication. In 2019 she was an Erasmus doctoral student in the Metatechnicity research group at Cardiff Metropolitan University in UK and also a Freemover doctoral student at Ionian University in Corfu in Greece. As the part of her research she practised at “f.e.a” - Forum Experimentelle Architektur – Museums Quartier in Wien in the position of Erasmus doctoral student. In her transdisciplinary research, spanning Art & Design, Science, Technology and Electronic Literature, she focuses on the ‘process based’ theoretical paradigm in digital typography and creative possibilities of a digital text layout which are based on the transition from grid to rhizome. In her arts practises she is interested in an intermedia creative space.
Andrea Gogova
Back