Since antiquity, the Individual is defined philosophically, legally and psychologically as an entity and subjectivity that is distinctively separate from the rest, and indivisible from itself. As the relations and social institutions that constitute the individual and those that are formed around it are changing, there has been throughout history a constant struggle as to the gender, class, race and ethnicity of those recognized as individuals. True transgression and taboo has been the dissemination of the individual. The dividual denotes a broad set of subjectivities that are divided and at the same time are always in relation to others. With the second digital revolution, we are now faced with subjectivities that are divided from themselves online and offline and at the same time come to life through networks and constellations. As much as the dividual is a product of our networked computer reality today, it also precedes the individual, as it hints on nomadic, shared, and communal social existence.

In this paper, I will present the dividual it intertwines the hybrid with the disseminated, the distributed with the connected. Focusing mainly on Soviet contributions to the formulation of this emerging collective subjectivity I will discuss its manifestations in art, theatre, film, literature and politics. I will discuss the work of artists like El Lissizky (1890-1941), dramaturges such as Sergei Tretyakov (1892-1937), the legacy of Bolshevik polymath Aleksander Bogdanov (1873-1928) and his organizational science of Tektology, to Platon Kerzhentsev (1881-1940) and the Soviet science of management he developed which suggested a scale between the person and the collective, to Sergei Eisenstein (1898-1948) and his films which depict a perspective between the individual and the mass, to Andrei Platonov (1899-1951) and his 1920s novel Chevengur (published posthumously in 1972), which presents a mass of connected bodies as an entity that makes for the founsation of the social (In a letter to Maxim Gorky from 1928 Platonov describes the novel as an “honest attempt to portray the beginning of communist society."), to Neo-Leninist philosopher Evald Ilyankov (1924-1979) who conceptualized the distribution of the senses onto society and mapped a social history of the senses, while working with deaf-blind children. 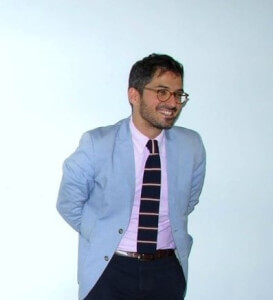 Joshua Simon
153. The Dividual – The Soviet contribution to an emerging subjectivity (Joshua Simon)
Joshua Simon is a curator and author based in Philadelphia. Former director and chief curator at MoBY-Museums of Bat Yam, Tel Aviv (2012- 2017), Simon teaches contemporary art history and theory at the Pennsylvania Academy of Fine Arts, the oldest art school in the US, and is a visiting critic at the Master in Fine Arts program at the University of Pennsylvania. Co-founding editor of the Tel Aviv-Jaffa based Maayan publishing. Author of Neomaterialism (Sternberg Press, 2013), and editor of United States of Palestine-Israel (Sternberg Press, 2011), Ruti Sela: For The Record (Archive Books, 2015), Communists Anonymous (co-editor, Sternberg Press, 2017), and Being Together Precedes Being: A Textbook for The Kids Want Communism (Archive Books, 2019). Recent curatorial projects include: The Kids Want Communism (conceived and initiated exhibitions and events in Prague, Melbourne, Kiev, Bat Yam, Athens, Warsaw, Ljubljana and Berlin, around the 99th anniversary of the Soviet Revolution with a two-year program dedicated to the project curated at MoBY and a final exhibition curated at Kunstraum Kreuzberg Bethanien, Berlin, 2016-2017), Second Nature (International Photography Festival, Tel Aviv 2017), and In The Liquid (PrintScreen Media Art Festival, Holon 2018). Simon holds a PhD from the Curatorial/Knowledge program, Visual Cultures department, Goldsmiths College, University of London, UK.
Joshua Simon
Back