Celtic and Nordic myths and legends are replete with shapeshifters, where identities dissolve and reform, ideologies are dismantled, and worlds destroyed and reinvented. In Staying with the Trouble, Making Kin in the Chthulucene (2016), Donna Haraway suggests that in the midst of spiralling ecological disaster, and the ensuing suffering we need to find new ways to reconfigure our relationship to the earth and to each other. Furthermore, anthropologist, Kathleen Stewart writes about affect coming into view through attuning one’s self to the forms and forces unfolding in scenes and encounters. Anthropological objects, she continues, are to be ‘walked around, approached from precise angles,’ or seen as states of being, ‘emergent, or suspended in potentiality’ (2017). Objects here, are the myths and legends we have inherited, they take place ‘within a world of some sort and it is itself a generative, compositional worlding [...] It’s like a sixth sense. It turns a potentiality into a threshold to the real’ (2010, 4). Through ‘atmospheric attunement’ she alerts us to the sense that something serious is happening,

With this in mind, and for this artist’s presentation I would like to tell a version of the Celtic Myth of Macha, one of the three Faerie Death Goddesses—the Morrígna. Macha is the goddess of battle and fertility, so linked for without death there can be no rebirth. Briefly the myth is about the call to war—a frenzy whipped up by the Morrígna; and the healing after the battle. Macha splits from her 2-sisters to become a wife, and a mother, only to be subjected to humiliation and abuse at the behest of her husband. At which point, she curses the men who subjugated and ridiculed her. The myth functions as a narrative to give voice to pain and address the lineage of trauma, while providing a framework to discuss the concept of moral injury, which requires a different language. Thereafter, I will unravel the myth using Haraway’s notion of 'SF'—strong figures, science fiction, speculative feminism, speculative fabulation— to formulate ways to stay  with the trouble of living and dying together on a damaged earth, where '[b]ecoming- with, not becoming is the name of the game' (2013: 12).

This pushing the boundaries beyond the human to a place beyond reality creates an interesting place to converse with and through. It reveals new material expressions and  understandings on the ways (causality) the body, society, knowledge systems and space-time interact and transform. Through the use of storytelling, I am exploring alternative methods of narrating the future in line with Simon O’Sullivan’s concept of future fictioning (2019). Storytelling is embedded in our DNA and my aim, as an artist, storyteller and researcher is to reawaken the wisdom, knowledge and curiosity where transforming and shapeshifting bodies become objects of knowledge: ‘material-semiotic generative nodes’ (Haraway,1991). Boundaries dematerialise and re-materialise in social interaction, constantly shifting from within, producing moving relational enquiries and practices, where meaning is a multi-faceted process of sensing and listening, the semiotic and the material. 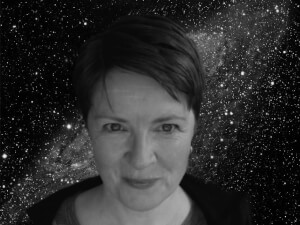 Anna Walker
147. Macha, the Shapeshifting Goddess (Anna Walker)
Anna Walker, Ph.D. is an artist, writer, and researcher working in mixed media, specifically moving image and sound. She has been exploring trauma in her art-practice research for many years, how the body responds to overwhelming traumatic and stressful situations and how it reorganises itself to cope with or manage the trauma. She was awarded an MA in Fine Art from Southampton University in 1998, and a certificate in Psychotherapy from CBPC, Cambridge, in 2010. An interest in the effects of trauma on the body led her to a Ph.D. in Arts and Media at Plymouth University, which she completed in May 2017. Her arts-practice balances the auto-ethnographic with the critical, utilising personal experiences to facilitate a greater understanding of memory, trauma, and its wider cultural implications. Most recently, Anna is researching storytelling as performance, bridging technology with traditional storytelling.
Anna Walker
Back