Eye Movement Desensitization and Reprocessing (EMDR) is a therapeutic option for people suffering from Posttraumatic Stress Disorder (PTSD) introduced in the 1990s by Francine Shapiro. During a therapy session, the patients recall the situation that has caused the trauma under instruction while following the therapists finger with their eyes. Initially, the method had a rather esoteric reputation for many years, despite shown beneficial effects on patients and their dealing with the trauma.

This changed when the efficacy of EMDR was proved in more methodologically elaborate trials, and recently cognitive neuroscience also showed its effect on a functional-structural level in the brain. Specifically, functional MRI showed that a recollection of the traumatic experience triggers an activation in the Amygdala and therefore fear and discomfort in the patient. At the same time, this activation was lessened it people doing the eye-movements and after repeated administration, the brain could be ‘trained’, to not show this activation of the Amygdala anymore. Now, the widely accepted hypothesis is that the significant improvement in patients’ PTSD symptoms derives from the brain ‘unlearning’ this reaction, and that EMDR therefore is a way to reprogram the wiring of underlying neuronal pathways.

In my interactive installation Therapy | Reprogram I am currently building a machine that mimics the therapists arm in an EMDR session and is presented along with the required instructions for a patient to ‘treat themselves’ without the help of a human therapist. Aesthetically, the machine consists of a hyper realistic arm that is molded from my own arm out of latex and polyurethane, along with a visible clockwork or metronome alike mechanic.

This setup is intended to pick up some questions also posed by recent digital versions of EMDR: As the benefit of the specific setup including a human therapist or the determined movements could not be shown, there have been trials on a version of EMDR that includes only following a dot on a screen with the eyes in solders after coming back from missions, as well as other digital reprocessing strategies that were more focused on reenacting the traumatic situation in a virtual setup. This puts in question many of the absolutes of psychotherapy, the biggest being the need for another human.

In my artist talk I want to introduce the project and discuss some crucial issues it entails. How is a treatment option validated and what is the path from esoteric hand magic to an accepted and widely used therapeutic practice? Do we need human therapists or can we be reprogrammed or reprogram ourselves with the aid of machines entirely? And in consequence, what does that automatization mean in terms of DIY mind hacking and self-optimizing enhancement techniques? And what does it do to our image of ourselves as humans, or rather post-humans, to update ourselves like a hard-drive with all the wide-spread and multifaceted techniques that have been introduced in the course of the evolution of cognitive sciences? 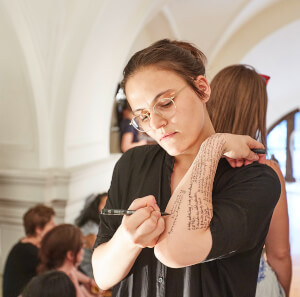 Laura Stoll
142. Therapy | Reprogram: Psychotherapy & Mind-Hacking (Laura Stoll)
Laura Stoll is a Vienna-based artist working in the fields of sculpture, installation and performance. Born in Innsbruck, she acquired a degree in medicine at the Charité Berlin before enrolling in the Art & Science MA program at the University of Applied Arts Vienna. In her projects Stoll is working on the borders of medicine, psychology and philosophy and employs the methods of these fields to research questions of personal identity, trying to understand how humans work. Since living in China during adolescence she aims to challenge the notion of subject and object as principal entities in Western philosophy. Besides that, Stoll is trying to come to terms with the limitations of intersubjectivity and establishing truths in science because she has read too many constructivist books. Laura Stoll is unmarried, has no children or dogs and lives in a shared flat in the house where Beethoven died in Vienna. Photo©Birgit und Peter Kainz; M.A.
Laura Stoll
Back