Agnus Dei (2020) is an audiovisual project that investigates the concept of algolagnia,starting from the basic interpretation of masochism up to the submission / humiliation of the submissive subject who seeks physical pleasure through the production of endorphins.

The starting point is a religious manifestation that is taking place every year in Trapani(Sicily) called Misteri. It’s a 24h procession in which the embodiment of music is particularly present.

The cathartic moment of this event arises from the progressive movement of the bodies which is expressed through the collapsing of a communal hallucination. The basic concept of pain is connected to the faith and submission focused especially on religious manifestations. The self-satisfaction achieved is the result of an almost spiritual elevation finding freedom in pain, as if this was a divine entity. The mystical experience is conceived as the overcoming of physical ecstasy, breaking the limits of the ego and merging all senses in communion with the declared entity. Visually all the clips were downloaded from pornographic productions of bondage practices, reinterpretations of passages from the Bible and excerpts from the "Mysteries of Trapani“ and hentai videos. The sonic approach in the research arises from the composition Agnus Dei by Samuel Barber. The compositional process is a dismemberment of the track with a focus on vocals processed with different techniques: from granular synthesis to glitch music approach. Additionally the sound derives from contents from the deep web like hentai and bondage videos. While adding several layers referring to the initial track, an intense sonic environment was created, willing to refer to the techno culture. The cathartic moment in the project refers to the musical impact from the aforementioned procession and its influence on its participants, where the tension of the moment is expressed through the collapse of a communal hallucination.

In the project, video fragments were treated with the data bending technique, letting the audio errors applied to the video give a distorted and glitching aesthetic to the visual experience. The project is both an audiovisual installation, intended for the spaces of techno culture (clubs, self-organized venues) and a theoretical research on the collapsing of submission between religious manifestation and definition of the freedom-concept between bondage practice and techno culture. 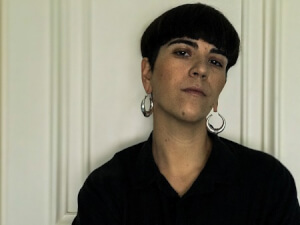 Valeria Di Sabato
14. Agnus Dei A/V Project beyond the faith (Valeria Di Sabato)
Alvax aka Valeria Di Sabato is an international sound designer, sound artist, music designer, music programmer and media installation artist. She is based in Sicily and Milano, her interests were conceiving electronic music and the production of experimental sounds. In Milan she attended a three year course in Sound Design and then a Masters in Sound Art. She worked with many internationally established sound artist and professionals in the audio field like Bill Fontana who gave her new ideas and ways to approach audio recording. Combining her interest for video games and music she discovered how to play using old consoles like gameboys and she became part of the micromusic Italy group playing in Milan (Leoncavallo). At the same time she was playing festivals and clubs with Robinija aka Roberta Busechian. She also performed at Cadorna Triennale in September 2016 and at Errant Sound Project space in Berlin.
Valeria Di Sabato
Back