This presentation is a discussion on the hypertext video (video capsule) about the installation Neotenous Dark Dwellers - Lygophilia https://robertina.net/lygophilia.

The Lygophilia is a wider series of 4 research-based artworks initiated in 2017 by Robertina Šebjanič in Mexico and pursued in Slovenia to explore the love (Gr.: philéō) of darkness (Gr.: lúgē) and the unknown dwellers in places inhospitable for humans. Lygophilia weaves together mythologies and sciences, history and future, fears and desires, continents, cultures, humans and non-humans. Lygophilia folds and unfolds the stories carried by those fascinating creatures that are the Axolotl, living in the swamps of Mexico City and the Proteus, established in the underground network of caves in Slovenia and nearby karstic regions. Axolotl and proteus are distinguished for their longevity and even more so for their extraordinary regenerative abilities and their maintaining eternal youth in adulthood - neoteny. These characteristics have made them the protagonists of ancient myths, part of cultural heritage, the national symbols of Mexico and Slovenia, respectively, and they have also put them at the centre of scientific research, throughout the centuries, from the description, classification and experiments of the 19th Century to today’s high-tech bio-medical research.

Robertina Šebjanič, artist and researcher will present the multilayered series of her works Lygophilia that consist of 4 works: the installation Neotenous dark dwellers - Lygophilia, the video essay Piscis ludicrous / Transfixed Gaze_Lygophilia, the sound composition Black Drops_Lygophilia, and the installation Odorantur_Lygophilia. The 4 works presented as Ligophilia, are all establishing empathic discourse and confront the cultural, biologica, ecological understanding the non-human subjects with focus on axolotl and proteus. The project is also resulted in an online publication - video capsule: Neotenous Dark Dwellers - Lygophilia, Robertina Sebjanic edited by Annick Bureaud on MemoRekall. http://www.olats.org/ope/ope.php  (best to use in Firefox and Safari if Chrome is not working).

Annick Bureaud was a dialogue partner and adviser to the project Lygophilia. She will present the hypertext video about the installation Neotenous Dark Dwellers - Lygophilia and discuss the artistic and aesthetic dimension of this installation. Based on the MemoRekall app, this hypertext video is exploring a new perspective for online publication format in which various texts and documents are contextualising the artwork as the video rolls. The documents are a mirror of the work seen as a “Dissection of a Human Gaze”. There are no axolotls nor proteus in the installation, neither alive nor dead. They have disappeared. They exist implicitly through the expression of our various appropriations, including the artwork itself.

The Axolotl Immersed in its Spatiality María Antonia González Valerio

What is an animal? What is an axolotl? In Šebjanič’s work, the latter is shown as an animal on the verge of extinction; as a living being captive inside laboratories; as a blown glass art piece, displayed in a box resembling cabinets of curiosities; as a specimen preserved in formaldehyde; as an organism similar to Proteus salamander; and as something that, perhaps, remains hidden in Xochimilco’s canals. Xochimilco is not a paradise in the city. It is a fossil. A reminiscence of ancient times when this city was an “aquapolis”. Not many years ago, there were still open rivers and canals that served agriculture and commerce. Robertina Šebjanič’s artwork Lygophilia series accomplishes the task of representing the different layers and conditions of these multiple circumstances that determine the becomings of the species axolotl, or Ambystoma mexicanum, in its spaces. What is an axolotl? I take the blown glass figure that was part of Šebjanič’s installation in my hand and I wonder… What is the story behind this animal? What has happened to this creature? What have been its voyages? Isolated in the compartments in the metal and glass cage, the dead specimens preserved in formaldehyde look at us… No metamorphosis will occur though, I will not go inside the container and look through with axolotl eyes… I’ve never eaten axolotl. The space in which axolotls appear nowadays is very different from…

The Beast from the Black Hole Polona Tratnik

The following paper is written along the art project Neotenous Dark Dwellers - Lygophilia, in which Robertina Šebjanič researches the culturalisations of Mexican Axolotl and the Slovenian Proteus anguinus as the animals that love the darkness and the places inhospitable for humans. The article addresses the axolotl, the human fish and the deep see squid, their living environments and the relationships with man or man with these animals that live in different worlds than man, but that at the same time inhabit the same planet, where we coexist in mutual dependence. The author examines the human approaches to these animals, which expand from exhibiting the fear of the “power of Nature”, the theoretical admiration and the exercises of human dominance, be it in the form of hero fairy tales or the biopower of regenerative medicine. All of these “classical” attitudes have been very much actual in the modern age and many still are today. The author furthermore questions the eventual posthumanist perspective, which leads to the comprehension of the functional living and non-living systems as connected machines. While the classical relationships between man and animals are based on nonequal power forces and are anthropocentric, the recognition of the environments of different species, which first marked the alienation particularly of some species from man, is at the same time the key to finally recognize the operationality of various systems, which are actually connected. 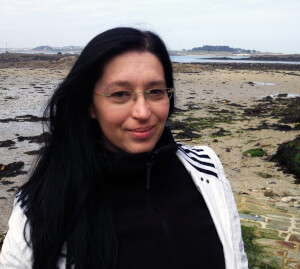 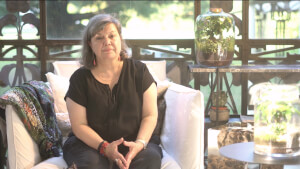 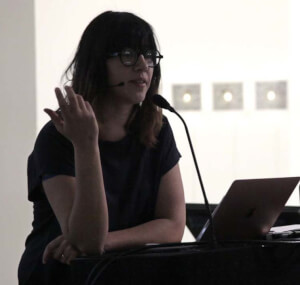 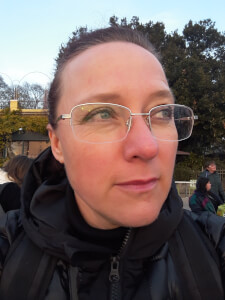 Polona Tratnik
133. The project Lygophilia (Robertina Sebjanic, Annick Bureaud, María Antonia González Valerio, Polona Tratnik)
Polona Tratnik is Scientific Councilor at Institute IRRIS, Full Professor and Dean of Faculty for Slovene and International Studies of New University. She was a Fulbright visiting scholar and guest professor in the USA, China, Finland, and Mexico. She is the president of the Slovenian Society of Aesthetics, and vice-secretary general of the International Association of Aesthetics. She has authored Umetnost u savremenosti (Orion, 2018), Conquest of Body. Biopower with Biotechnology (Springer, 2017), Hacer-vivir más allá del cuerpo y del medio (Herder, 2013). Her research fields comprise: aesthetics, philosophy of art and science, media theory and interdisciplinary studies of fairy tales. She is a pioneer bio artist. URL: https://independent.academia.edu/PolonaTratnik; www.polona-tratnik.com.
Polona Tratnik
Back